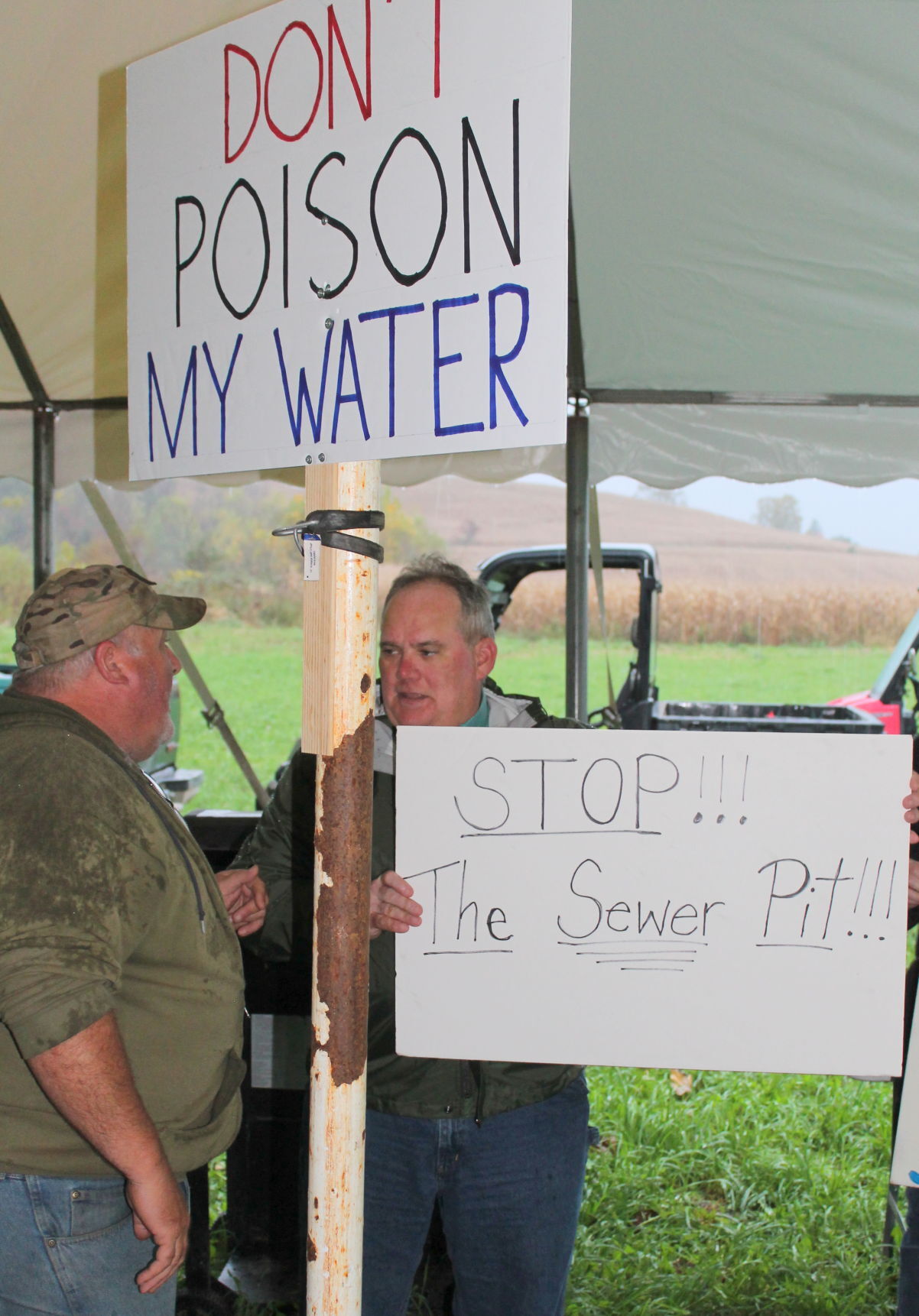 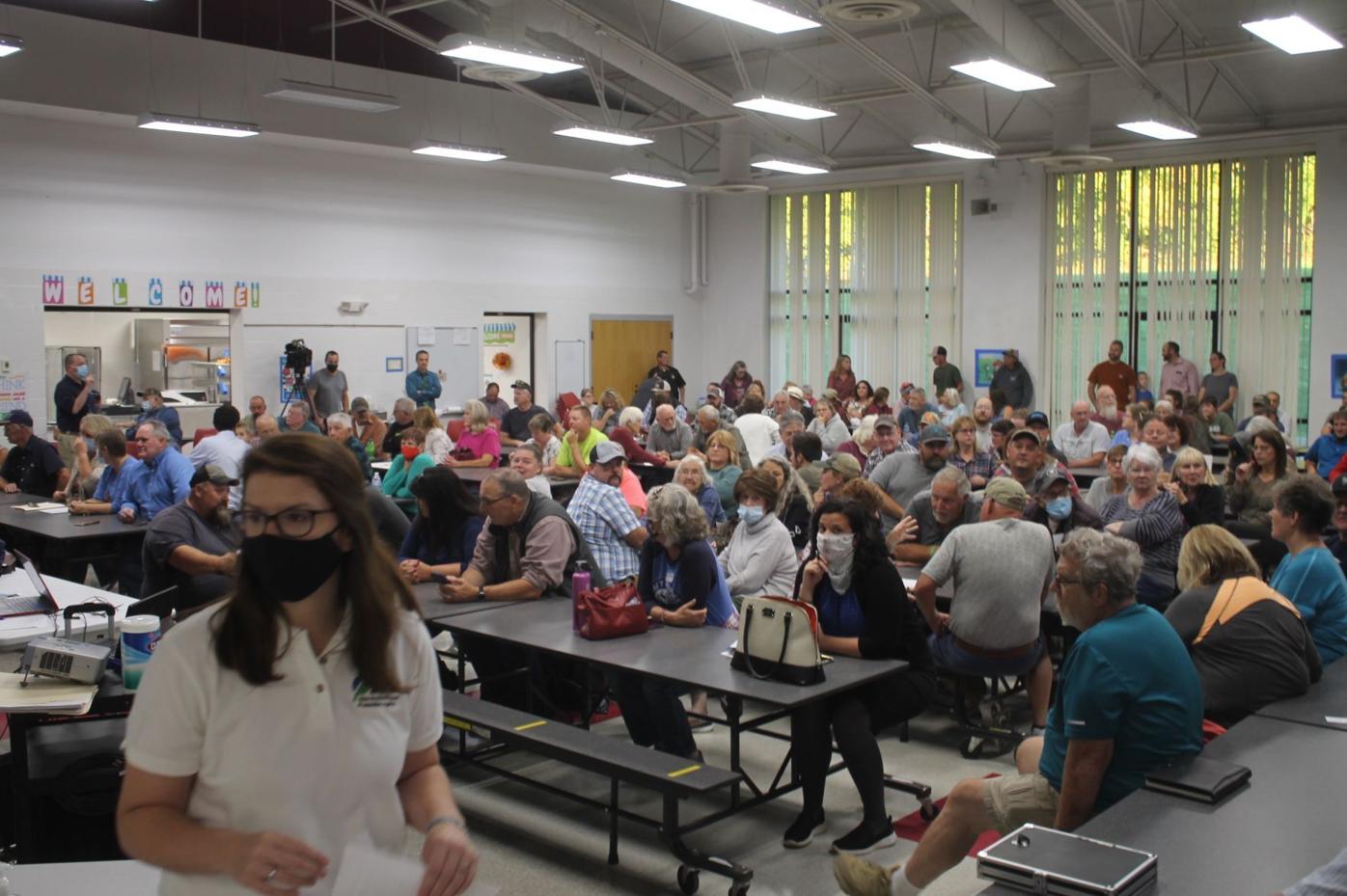 Hundreds of area residents turned out to comment on the proposed waste storage pond at an Ohio EPA hearing Oct. 20.

Hundreds of area residents turned out to comment on the proposed waste storage pond at an Ohio EPA hearing Oct. 20.

MOUNT PERRY – Less than a week after a large crowd turned out to an Ohio EPA hearing to comment on a proposed draft permit for a 20.6 million-gallon storage pond in the Mount Perry area, around 50 people attended a rally in the area to express opposition to the project. The facility, proposed by Mount Perry Nutrient Storage, LLC, would hold what are called “class B biosolids.”

While many products make up Class B biosolids, the one that apparently most concerns the residents around Mount Perry is human waste.

According to the U.S. Environmental Protection Agency (EPA), “properly treated and managed biosolids do not have an impact on surface water or groundwater quality.” Mount Perry residents have focused their concerns on the four words “properly treated and managed.” One resident, Imogene King, who attended Monday’s rally said the land in question is glaciated soil with very little clay in the soil mix. She fears the groundwater will be contaminated thus making the well on her property unusable. King lives approximately a half mile from the proposed lagoon.

“I’m here for my grandson,” stated King. She explained that her son’s family is planning to return to this area once his military service is over.

The meeting was held on the property of John Smith, which lies directly across the road from the planned lagoon where work has already begun on the project. One of those protesting the lagoon installation was Lillie Rockwell, who returned to Perry County 16 years ago following her husband’s retirement from the armed services. She added that another motivation to return was to care for her mother.

“We love to sit on the porch and enjoy the beauty of this place, but the odor from this lagoon will ruin that,” Lillie Rockwell said. Her husband is of the same opinion.

Also attending the rally was Madison Township trustee Shawn Glenn. He questioned how the three field tiles that run across the area where the lagoon will be located will affect how well the lagoon can be safely sealed.

The general consensus of the people at the Monday night rally was that Perry County offers corporations an easy target for projects like a biosolids lagoon.

On Oct. 20 about 200 or more Mt. Perry area residents had packed a room of the Glenford Elementary School, to offer public comments to the Ohio EPA on the proposed draft permit for the facility. The permit applicant already has the green light to build the pond, and is now seeking permission to store the biosolids.

The feeling in the room during that hearing was also clearly in opposition to the project. Comments offered to the EPA by area residents included:

“If they can no longer put (this kind of waste) into the ocean, why are they going to put it in my backyard?”

“If I wanted to live in an outhouse I would have built one and lived in there.”

Various concerns were raised by speakers at the hearing, including a perception that the hearing had not been adequately publicized; that the facility will bring down property values; and that if any of the pond’s contents leak out into the surrounding area, they will promptly be tracked far and wide by animals such as deer.

One speaker, Jennifer Lynn, said her family is relatively new to the area. While she insisted afterward that she is “not an activist of any kind,” she told the crowd that she would tie herself down at the pond site if that’s what it takes to stop the project.

After Lynn’s comments the crowd rose to their feet and applauded.

According to an Ohio EPA news release, the Mount Perry Nutrient Storage Facility would be a 4.8-acre site on County Road 34, for the “storage and beneficial use” of class B biosolids.

“Ohio EPA will consider technical, economic, social, and environmental aspects of the project before deciding whether to issue or deny the permit,” the release stated.