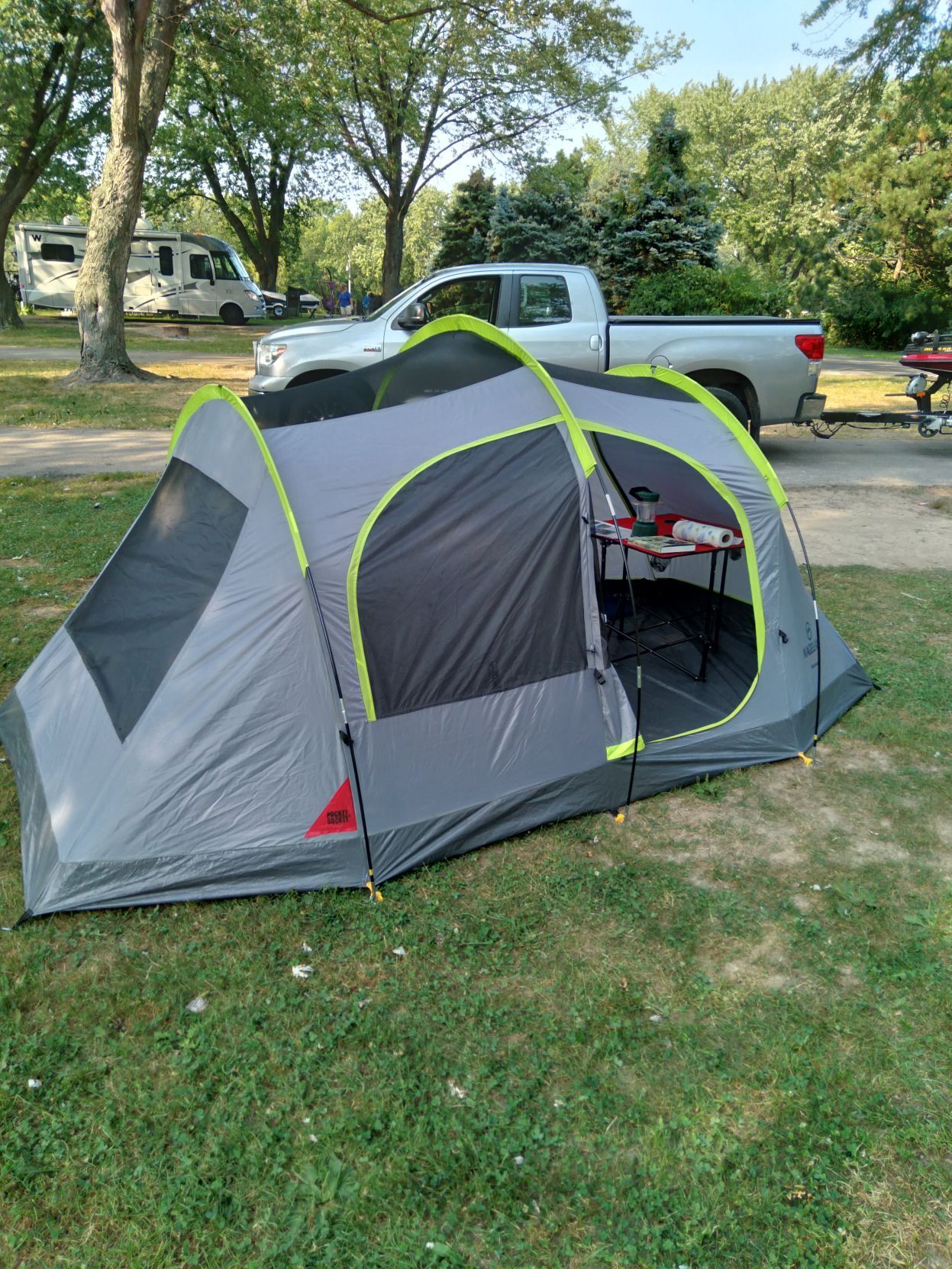 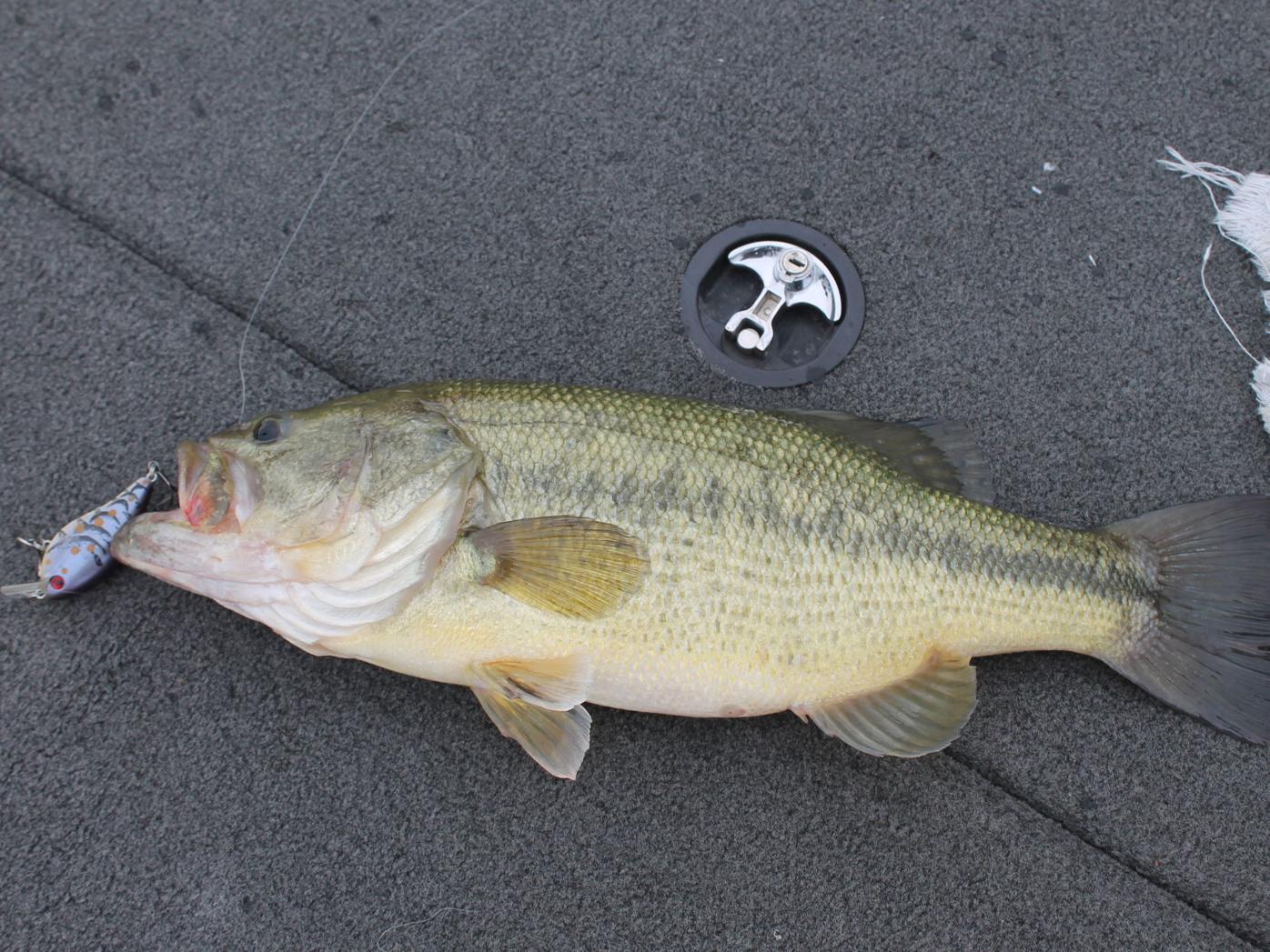 A Sandusky Bay largemouth bass could not resist attacking the crankbait seen in the photo. 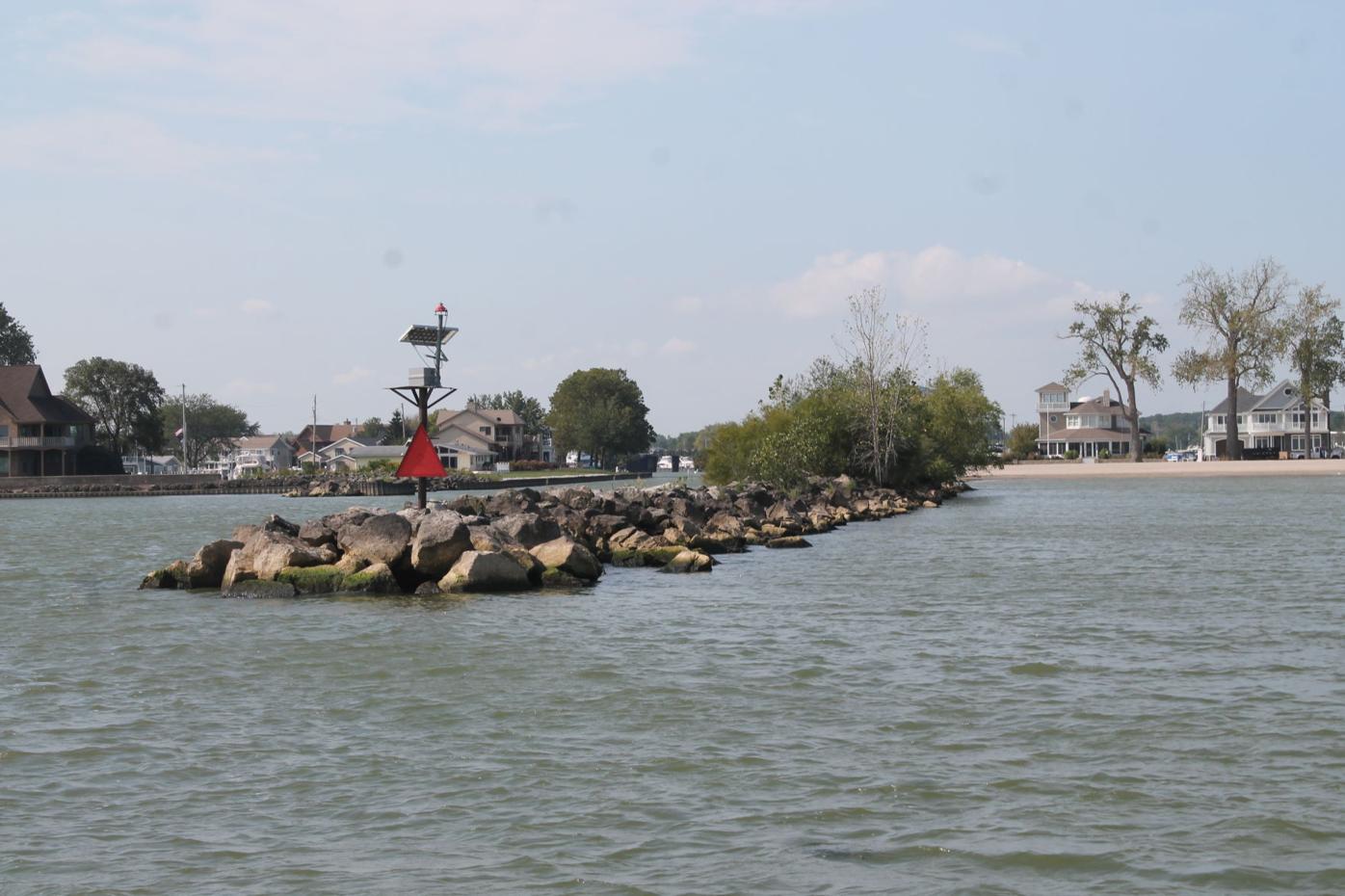 A Sandusky Bay largemouth bass could not resist attacking the crankbait seen in the photo.

LAKESIDE- MARBLEHEAD, Ohio- Given the headline and the season (and my occupation in a previous lifetime), you may have guessed this story is football-related. However, nothing could be further from the truth, which is a good description of most fishing stories. My September nights took place at the East Harbor State Park campground near Lake Erie, without a football in sight.

This was my first camping trip to Lake Erie since an attempt to enjoy an East Harbor outing in July. That adventure ended abruptly before I had a chance to pitch my tent. Upon arriving at East Harbor, I decided to go fishing before I set up camp. My three-day campout came to a grinding halt when I plowed my boat’s prop into an unmarked rock reef on the southern side of South Bass Island.

That Yamaha 225 SHO motor can skip my Skeeter bass boat across the water until your hair tries to escape, but it doesn’t cut through rock worth a hoot. The diagnosis of a damaged prop, skeg, and shaft, as well as what it would take to make repairs was immediate thanks to Robbie at Anglers Outpost in Lancaster, Ky.

However, like everything else in the COVID era, ordering anything from anywhere is maddening. We have billionaires blasting themselves into space, but it took over a month for the parts to arrive so my motor could be fixed.

The gameplan for my three-day September getaway was to target the largemouth bass in Lake Erie’s bays and harbors. The forecast for the week had sunny conditions and high temps until Tuesday night when a cold front would be ushering in a line of thunderstorms, “some severe.”

In a tent any precipitation is severe, so I planned my return home for Tuesday afternoon after a weather-permitting morning of fishing. Sunday in East Harbor, Monday in Sandusky Bay, and Tuesday wait-and-see was my bass fishing gameplan.

On Sunday, I caught a few bass and one large freshwater drum, better known as a sheepshead, on the breakwalls at East Harbor. I did have a chance at one of those breathtaking sunset shots so popular on social media. Although I had left the camera in my truck, my new cellphone was in the boat somewhere. I finally found it, waited for it to progress through its series of “turn on” beeps, only to snap a photo of my head.

Yes, I selfie-moded my sunset shot. When my uncooperative fingers finally reversed that setting, the sun had sunk into a gray haze that hid the formerly brilliant red orb. After my “selfie sunset,” I decided on another adventure… an after dark trek to the campground’s shower house.

A near-death encounter with a skunk had me close to wearing Mother Nature’s worst perfume. However, my effort to maintain hygiene had another surprise. I will skip the details, but I recommend brushing your teeth in a well-lit location. Cortizone 10, an anti-itch relief ointment, comes in a tube very similar to Colgate. Cortizone 10’s dental care is yet to be determined, but I haven’t scratched my teeth for days.

When I pitched my tent, I was too anxious to hit the water to fool with the cantankerous rain flap that serves as the top cover. That night when I hit the air mattress, I realized the tent had a mesh ceiling. With the Moon in one of its fractional moods, the stars looked like little beacons for space travelers. You know, like that Bezos dude.

The cool night breeze coupled with that starry backdrop made for a great night’s sleep. The campground at East Harbor is hardly party central, and the scant post-Labor Day crowd was ideal for an early bedtime.

Fishing the next morning started minutes after the 7:04 sunrise on Sandusky Bay. I started with slow moving drop baits like a plastic worm and a jig/pig combo. I caught a nice two-pounder right away and then a small bass.

I rarely fish Sandusky Bay so I thought throwing a crankbait would be the best way to cover water and find the bass. I selected a Strike King 1.5 squarebill crankbait in a light blue pattern with little orange spots. That lure has worked for me at Lake Erie in the past, especially at West Harbor. Now I know it’s a killer in Sandusky Bay.

A four-pound bass was the first to agree with my bait choice. Three bass in the two-pound range followed in the next 30 minutes. The bass were located along a riprap bank close to the boat ramp. When a bass weighing 3.5 pounds made a meal of my crankbait, I thought the morning couldn’t get any better.

The next bass blew holes in that theory when a five-pounder took an already successful morning up a notch. My good luck lasted until I violated the air space of a Sandusky Bay squadron of yellow jackets.

With the bass bite transitioning to bee stings, I decided to trailer the boat and sought solace at Toft’s Ice Cream Parlor. It’s a short drive from Toft’s to the boat ramp on West Harbor so I finished my fishing day there.

“Been here six hours and have one 12-inch bass,” was the comment from a guy with a Ranger boat who was leaving as I arrived. I found the bass fishing to be as difficult as advertised for two hours, but eventually I tallied four bass in the 10- to 12-inch range, plus two enormous sheepsheads.

Everyone except Bill Nutt will be surprised that I forgot to take a landing net with me. Nothing like wrestling a nine-pound fish on eight-pound test line over the side of a boat.

A beautiful Tuesday morning followed another spectacular September night under the lights, so I fished the breakwalls at West Harbor until noon. If you decide to make a run to Lake Erie this fall, check the weather report with special attention to the wind. At 7 a.m. Tuesday morning the wind was 10-15 miles per hour from the southwest. By 11 a.m., it was a 15-20 mph wind from the east-northeast with gusts up to 25.

By the time those gusts hit 25, I was doing 70 on Route 2, headed home with hopes of hitting Ohio’s best fishing spot again before the snow flies.