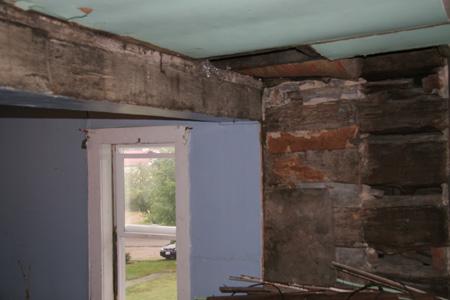 The two story hand hewn log tavern, which was built in 1807 when Thomas Jefferson was President, remains intact and virtually unaltered underneath the 20th century white board siding. 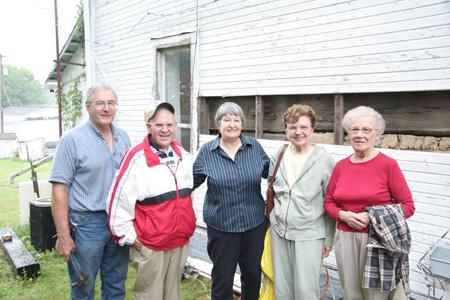 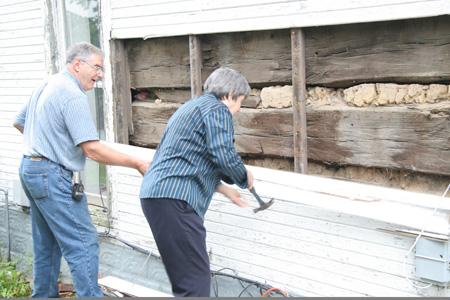 Mike Flautt revealing the hand hewn logs underneath the white siding with Ann Bigelow beaming beside him at the excellent state of preservation of the timbers. After two hundred years only the clay chinking between the logs needs repair.

The two story hand hewn log tavern, which was built in 1807 when Thomas Jefferson was President, remains intact and virtually unaltered underneath the 20th century white board siding.

Mike Flautt revealing the hand hewn logs underneath the white siding with Ann Bigelow beaming beside him at the excellent state of preservation of the timbers. After two hundred years only the clay chinking between the logs needs repair.

(Editor’s Note: Information for this article was provided by Tom Johnson, a member of the Perry County Historical society.)

The Historical Society of Perry County recently purchased and is in the process of renovating a building that stands on Pigfoot Square in Somerset.

It has been authenticated as one of the original two taverns in the town, built by Jacob Miller in 1807 and was subsequently owned by General Phil Sheridan’s father when the family first moved here.

It is currently covered in white wooden siding, but underneath, it is a two story log building made from hand hewn logs cut from old growth trees.

The exciting discovery  this historic structure still exists was made by local Historical Society member, Ann Bigelow, while researching early 1900 copies of the Somerset Press newspaper.

Renovations inside the structure by then owner Mike Flautt, had recently revealed the building is actually a two story log structure. A number of the walls inside have been exposed, leaving the massive ancient logs…some running the full 30 foot length and width of the building.

Society members have been working closely with Chris Buchanan in the Preservation Department of the Ohio Historical Society.  There is a lot of excitement about the fact the tavern is likely the oldest example of its kind still in existence in Ohio and about the preservation condition they’ve found.

What is so rare is that there appear to have been no major alterations to the building’s structure and internal walls since it was originally built.

“Standing inside on the wide wood floor boards, some measuring over 22 feet, you can almost feel you’re being transported back to the early pioneer days in the county with the Native American Indians recently departed and the land covered with trees uncut for hundreds of years,” stated Historical Society member Tom Johnson.  “This spot became a way-stop on the old Zane Trace, the original road built through the new Northwest Territory, along what had been the Monongahela Indian trail.  There would have been only a few thousand settlers inhabiting  the whole state of Ohio at the time the tavern was built, so imagine how welcoming Jacob Miller’s fire and fare would have been to travelers.”

Jacob Miller and his wife Catherine were an industrious pair of Pennsylvanian Germans.  They purchased 320 acres of land at the Congressional Land office in Chillicothe in the spring of 1805, with the going price at the time being $1.50 per acre. This land today includes the western half of the Village of Somerset divided by Columbus Street.

The eastern half was purchased by John Finck, who built a tavern where the public school now is now located. Together, Finck and Miller founded the village of Somerset in 1807 and plotted out the village into lots which they then sold off to early settlers.

Jacob had sold over 40 parcels of land before 1825, when had his last will and testament recorded, (now in the Perry County Courthouse.)  He willed his soul to heaven, his body to dust, and besides his copper and 10 gallon iron pots, left the remainder of his estate to his beloved Catherine, provided she remain his widow and not remarry.  Over the next 20 years, this prosperous lady sold over 50 more parcels to newcomers to the town.

An interesting history book from 1888, provides a fascinating glimpse of life along Zane Trace….“Westward along its course, giving constant occupation to hundreds of tavern-keepers, seated at short distances along its borders and consuming all the spare grain raised by the inhabitants for many miles north and south of its line. Groups of merchants on horseback with led horses, laden with Spanish dollars, traveled by easy stages every spring and autumn along its route, congregated in parties of ten or twenty individuals, for mutual protection, and armed with dirks, pocket pistols, and pistols in holsters, as robberies sometimes took place in the more wilderness parts of the road.” (Howe’s Historical Collections of Ohio, 1888.)

The tavern’s illustrious history was only further enhanced when it was discovered during a review of the property records in New Lexington, that the tavern was purchased by Phil Sheridan’s father in 1834.  The family lived there until moving to a house on Sheridan Avenue a couple of years later.

Historical Society President, Joanne Hoover is enthusiastic about the prospect of returning the tavern to its original log exterior and early period interior.

Mayor Bill Schmeltzer joined the group recently as they cut away the white siding to inspect the condition of the logs, saying, “This is the most exciting thing to happen in the village in a long time.”

Society members and volunteers have already put in over 100 hours of work cleaning and assessing the project’s next steps. While work on the tavern restoration will likely be a long process, the prospect of seeing the building returned to its former state should be rewarding.

The Historical Society’s museum next to Carpenter’s Market in Somerset is open every Saturday from 9 a.m. to 2 p.m. Anyone interested in learning more should stop by.