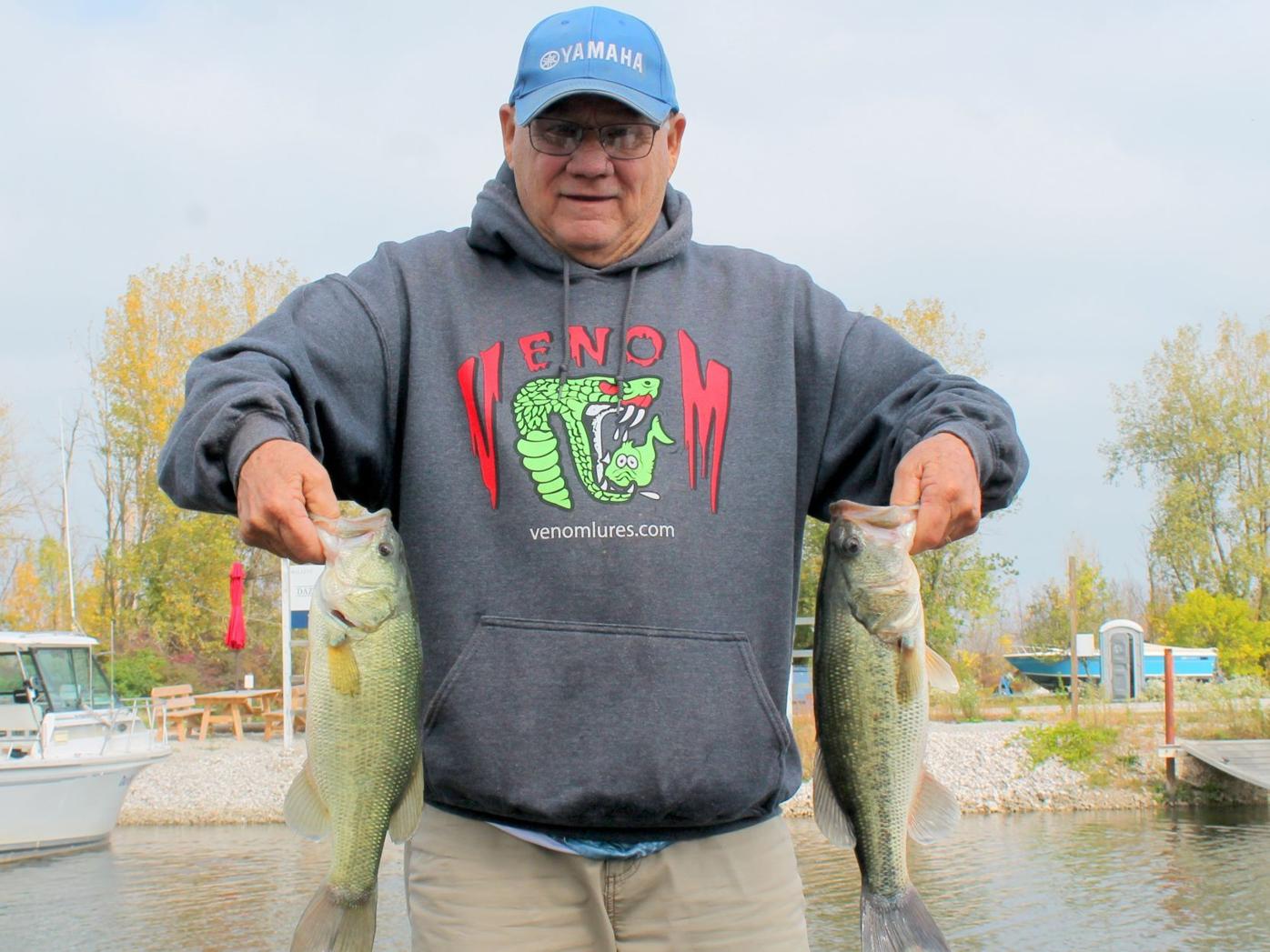 Mike Baughman holds two of the first bass caught on an overcast day at Wild Wings Marina on Lake Erie. 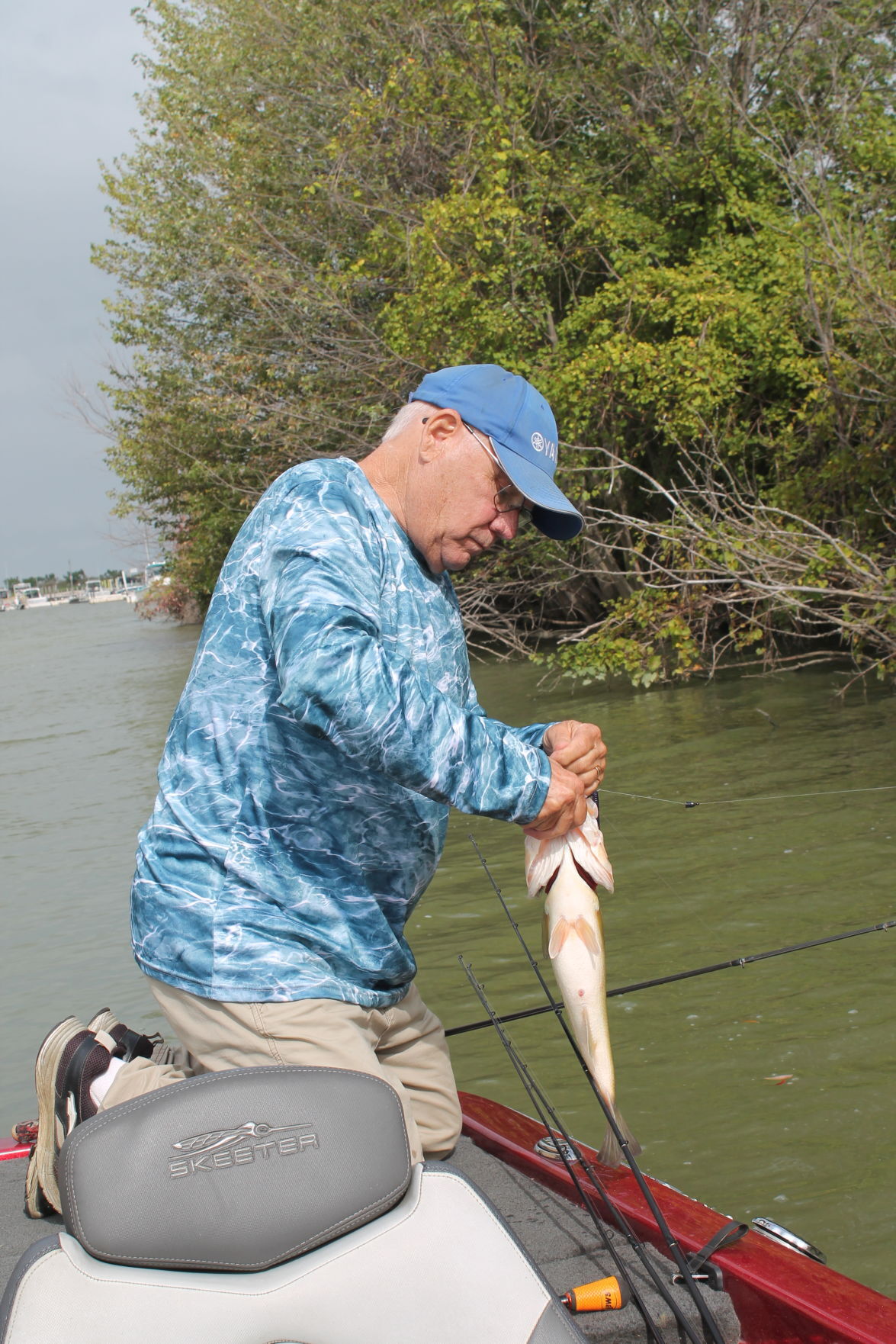 Mike Baughman carefully removes the hook from the last bass he caught on a day of fishing at Lake Erie.

Mike Baughman holds two of the first bass caught on an overcast day at Wild Wings Marina on Lake Erie.

Mike Baughman carefully removes the hook from the last bass he caught on a day of fishing at Lake Erie.

OAK HARBOR, Ohio – When I saw the Facebook post that Mike Baughman had notched another birthday, I knew the perfect gift to get him. I picked an October weekday that had the least chance of rain in the Port Clinton area and then contacted Mike to see if his social calendar had room for a Lake Erie run.

“When we leaving?” was all Mike asked. We settled on a 3 a.m. departure, but I knew what that really meant. The late coach of the Green Bay Packers, Vince Lombardi, was as famous for his “Lombardi Time” as he was for winning Super Bowls. Coach Lombardi considered on time to be 10 minutes before the scheduled meeting time.

He may have outcoached my friend, but Lombardi would never “out time” Mike. I knew leaving at 3 a.m. meant Mike would be at my house no later than 2:45. I was confident as I raised the garage door at 2:32 that morning that I was ahead of schedule.

When the garage door went up, Mike was standing directly in front of me holding all his fishing tackle. If he had held a chainsaw, I would have needed CPR to kickstart my heart.

“Mike! How long have you been standing there?!?” I managed to say after the oxygen revisited my brain.

“Just got here,” said my fishing buddy. As we loaded his gear in the boat and secured the trailer-to-truck connection, Mike gave me the weather forecast.

“Looks like fog all the way to the lake,” reported Mike. The forecast was right. We weren’t fog-free until we hit state Route 2 that runs along Lake Erie’s southern shoreline.

Since Route 13 was devoid of traffic, we arrived at Wild Wings Marina before the sun rolled out from under its nightly blanket. While rain chances were iffy for the day, the northeast wind promised a definite 10-15 mph blow with occasional gusts to 20 mph. That kind of Lake Erie breeze means fishing protected bays and harbors.

That posed no problem because Wild Wings has provided excellent fishing for us in the past. Mike’s “there’s one” came on his third cast. He hooked his second bass on the next cast, and I caught one on a Venom spinnerbait a minute later.

Three bass in two minutes had us hoping the fishing would be good all day. Mike was throwing one of his favorite lures, a Texas rigged 4-½ inch black grape Zoom finesse worm. After he landed his fifth bass, I traded my spinnerbait for a Zoom worm.

Wild Wings Marina has the full menu of the cover bass love. Docks, boat slips, riprap banks, brushy shorelines, and depths up to 10 feet make the marina the kind of water that holds bass throughout the season. Mike and I both prefer pitching slow moving baits to specific targets so the marina sets up well for our style of bassing. If you’re a rapid fire crankbait thrower, Wild Wings has water suitable for that approach too. However, plastic worms, jig & pig combos, and Ned rigs pitched tight to the cover have always been our top top producers there.

“Let’s try the point over there and then head down the right side,” suggested Mike. Like the rookie pitcher in “Bull Durham” who learned the hard way to follow his veteran catcher’s sage advice, all I did was nod and point the nose of the boat toward the gravel lined point. Sure enough, we both had bass on the hook in our first few casts.

As fishing trips go, Wild Wings is like visiting an old friend for us. At one of the channels we always fish, Mike recalled the five pounder I caught there last year. And he never lets me forget the prehistoric looking grindle (bowfin) that I thought was a big bass.

“You can’t have anything nice!” Mike joked as he unhooked another bass that had chewed his Zoom bait beyond the point of making another cast with it.

Our original plan had been to fish Wild Wings until lunch before trailering the boat and heading to Sandusky Bay. But time flies when bass are biting, and it was 1:15 when we checked the time. Our plan was to be heading home between three and four o’clock that afternoon.

“By the time we pull the boat out and drive 20 miles to Sandusky, we’ll have about 30 minutes to fish,” estimated Mike. I totally agreed so we decided to re-fish a couple favorite spots while hitting an area we don’t usually try.

At the first new spot, a chunky bass nailed my spinnerbait like he had been waiting all day for it. Despite looking very “bassy,” our new spot failed to produce another bite. This lack of action prompted another idea from Mike.

“Let’s hit that woody bank where we started and then head for the ramp.” That move would take us close to our planned departure time so I used the trolling motor to reach our final shoreline.

When I heard the sudden swoosh of Mike’s rod, I knew it would be curved in a bass-fighting arc. The bass broke the surface as it tried to dislodge the Trokar hook. It proved to be Mike’s best bass of the day.

Five minutes later I ended the catching for the day when a solid 12-inch bass blasted my spinnerbait. All that remained for a successful end to another fishing adventure was our traditional lunch at the McDonald’s south of Mansfield. Due to a staffing shortage, our McDonald’s booth was a Tundra tailgate, but we didn’t mind. We estimated we’d caught at least 50 bass, maybe more.

Regardless of how many bass were caught, I knew a birthday bassing trip was the best present I could bring to my friend’s party at three o’clock in the morning.