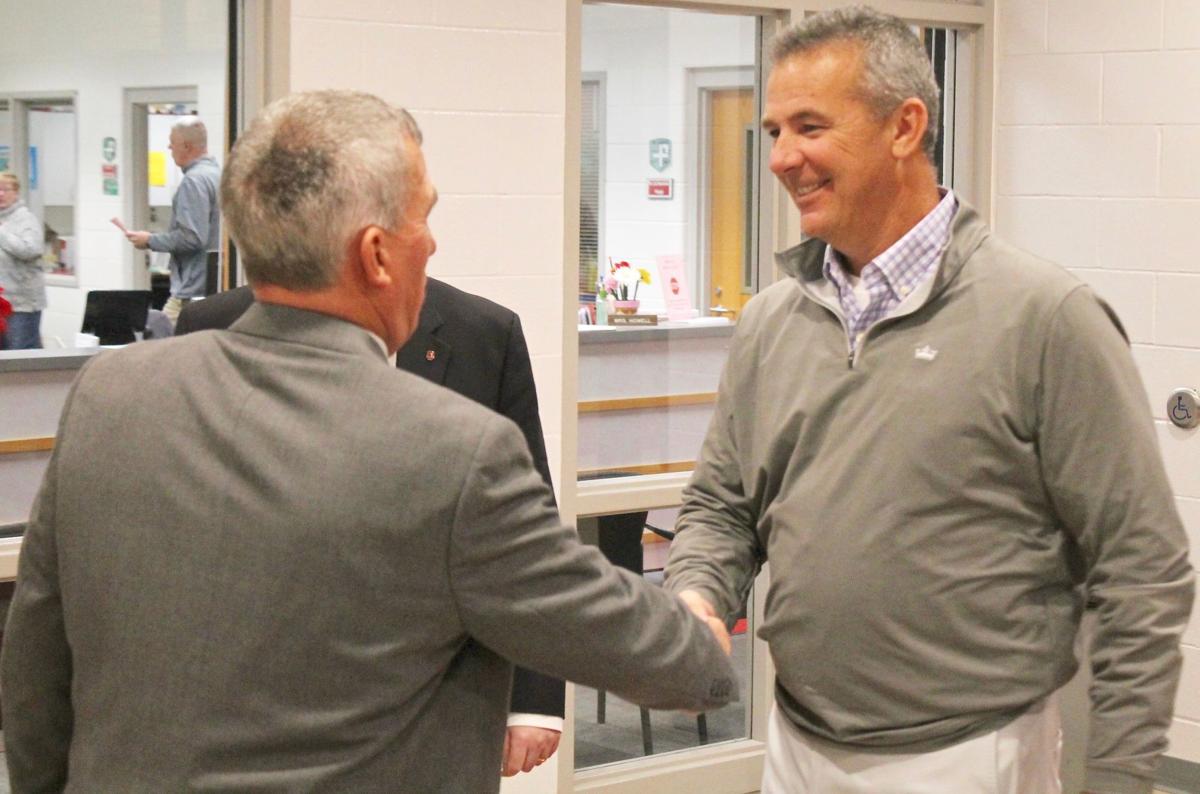 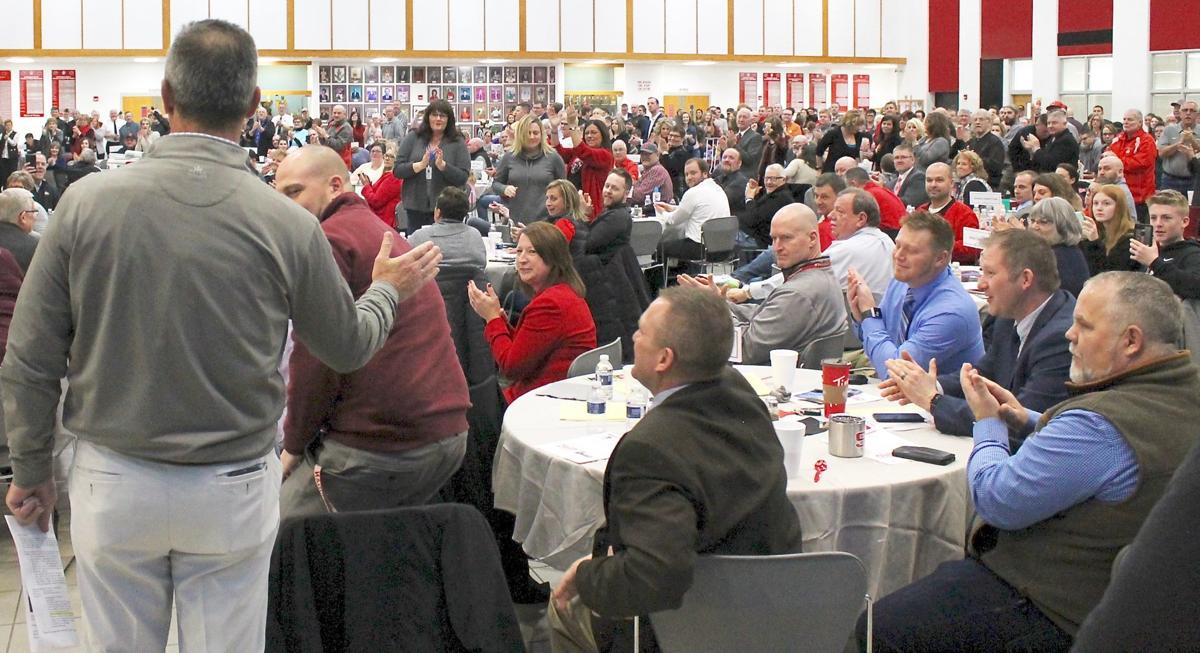 The crowd at Sheridan cheers for the former Buckeye head coach Urban Meyer. 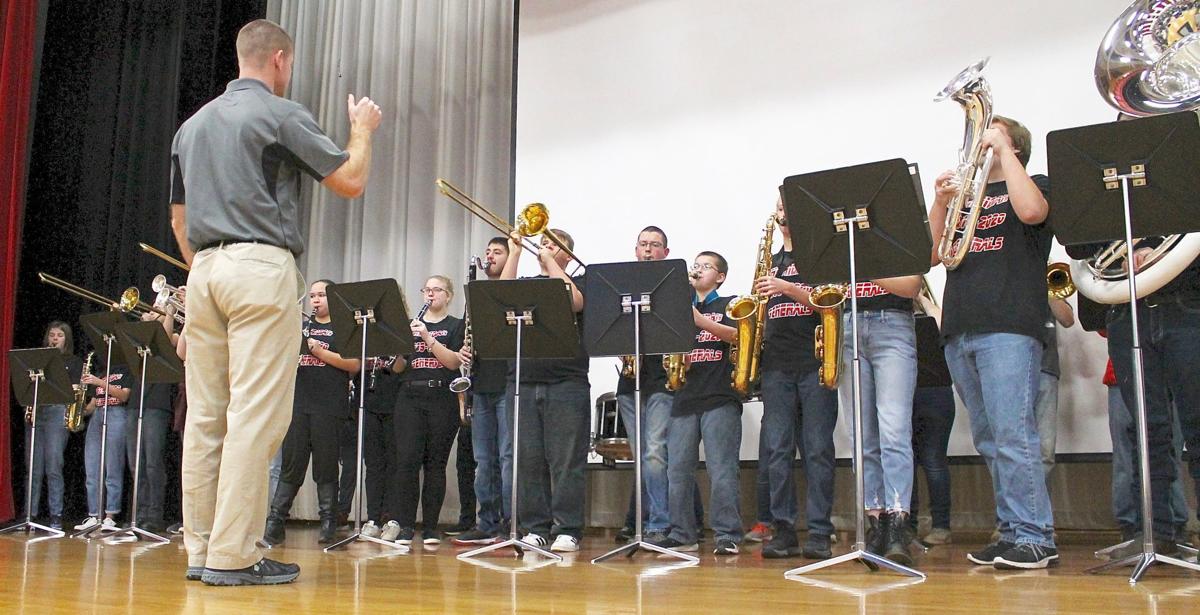 The Sheridan High School Marching Band plays while Urban Meyer walks into the commons area at the high school in Thornville. 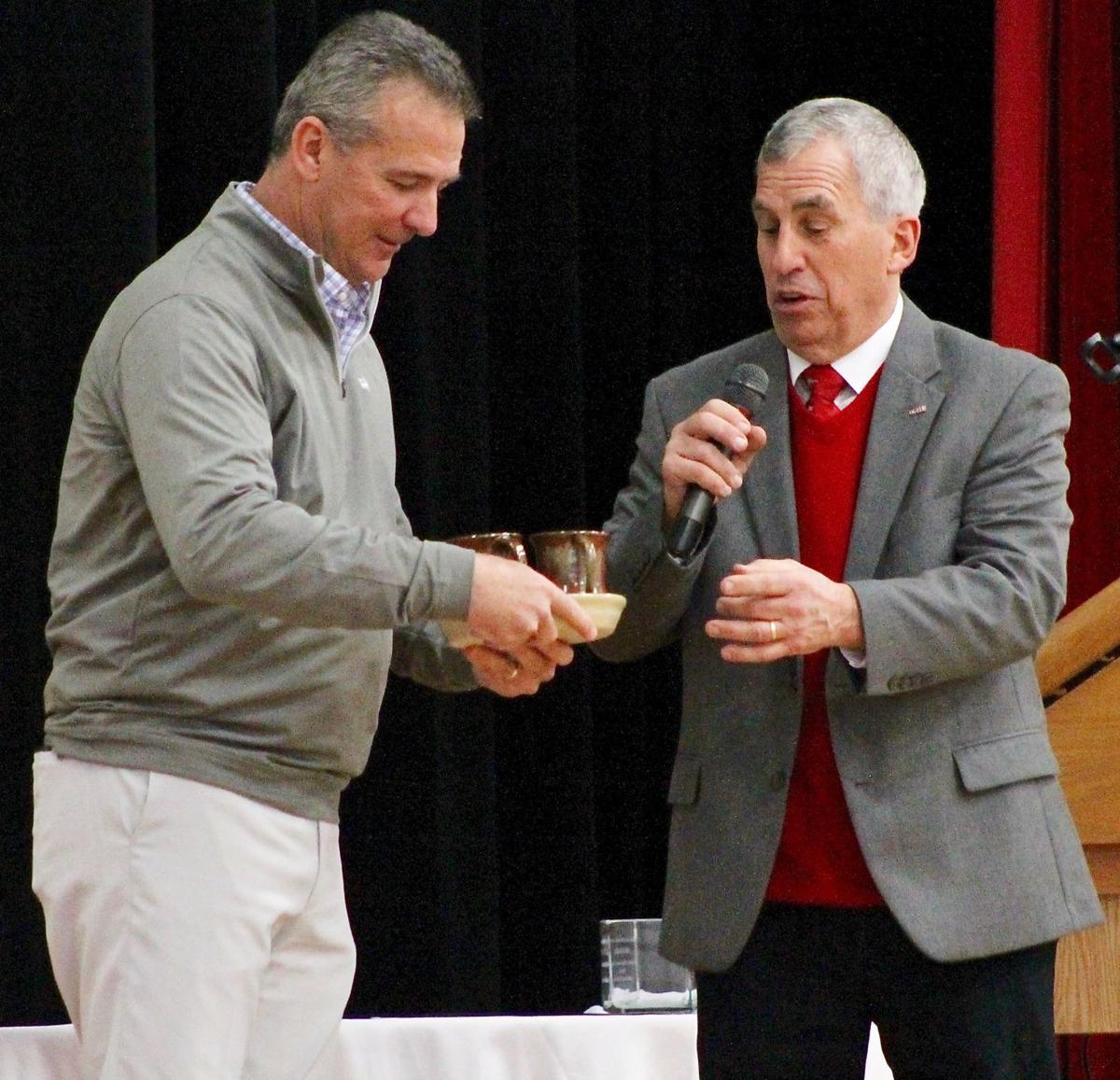 The crowd at Sheridan cheers for the former Buckeye head coach Urban Meyer.

The Sheridan High School Marching Band plays while Urban Meyer walks into the commons area at the high school in Thornville.

THORNVILLE — There was no rest for the weary Friday morning as some woke up as early as 3 a.m. to get ready for the Perry County Chamber Annual Groundhog Breakfast at Sheridan High School in Thornville. A packed room of local business owners, employees, government officials and students waited patiently for keynote speaker and former head Ohio State football coach Urban Meyer.

Perry County Chamber of Commerce Executive Director John Ulmer welcomed the crowd to the 2020 Chamber event. After welcoming the crowd, Ulmer expressed to those in attendance that Meyer was en route to the event; however, he would be unable to take photos and sign autographs due to his responsibilities in Miami where this year’s Super Bowl is being held.

“He is on his way,” Ulmer announced.

First on the agenda for the breakfast event was a warm welcome by Tom Perkins, Superintendent of Northern Local School District. He thanked those who came and asked them to give a round of applause to the kitchen staff at the school.

Ulmer introduced the corporate speaker, Jordy Anderson. Anderson is the creative mind behind Mount Perry Propane which started out initially when he purchased a truck in 2010. Since he first began operation, they opened a new facility in 2013 while also servicing over 1,700 customers; numbers are again up for the company since then. The company operates in Muskingum, Perry, Licking and Fairfield counties.

Anderson attempted to keep his time at the podium short as he as well as others were anxious to hear what Meyer had to say. With his time, Anderson went through the history of his company and the growth that has happened since its original creation ten years ago.

“I’d like to thank the Chamber for the opportunity to speak to you guys this morning,” Anderson stated.

Next on the event’s agenda was the Perry County Chamber of Commerce Vice President Julie Paxton presenting the Eagle awards to several businesses that have made an impact in the community. Eagle awards were presented to Auto Obsession LLC, B&K Drive Thru, Holiday Farm, Little Italy, New Dimensions Fitness and Tanning, NoelTree Farm, PerCo Inc., Shannon’s Pit Stop Trotter’s Pub and Grill and Thornville Hardware and Supply.

“Award winners, on behalf of the Perry County Chamber of Commerce, thank you again for your economic investment in our county,” Paxton stated while also issuing a round of applause.

While the crowd waited with anticipation, Meyer first stepped foot into the doors of Sheridan High School around 7:40 a.m. while the school marching band took their places. As the former Buckeye coach walked into the commons, the school band played songs from Ohio State football games with the crowd standing in applause. After the band concluded, Ulmer took the podium to formally introduced Meyer.

“We are extremely happy to have Coach Meyer here today,” Ulmer announced.

After a brief video highlighting Meyer, he took his presence to the podium as the crowd were extremely happy to see the former Buckeye coach.

Cracking jokes and having fun, Meyer said he met with Ohio Speaker Larry Householder who was instrumental in getting Meyer to come to Perry County. Both Meyer and his wife are from the State of Ohio, which is why he chose to come back to the state after his time at the University of Florida as head coach. Through his time as a coach, Meyer spoke to the audience about his experience working with players, coaches and the administration. He received his master’s degree from Ohio State in 1987 then proceeded to go work at Illinois State and Colorado State.

After going through his history, Meyer talked about work ethic and leadership he gained throughout the years. In a room with business professionals, students and public officials, Meyer told the audience that the key to success is love and ownership. He also stated that in order to obtain success you must be inspired rather than motivated because “that’s when you move mountains together.”

He recalled times in the 2014 season when it seemed that all hope was lost for the Buckeyes after stars Braxton Miller and JT Barrett fell victim to injuries. He believed in his third string quarterback Cardale Jones who ended up bringing a national championship to Ohio State. Towards the end of his speech, Meyer reiterated how “love and ownership” has the power to change things for the better.

After concluding his speech, Ulmer handed a gift to Meyer which was an assortment of clay mugs and a plate in remembrance of Perry County. The crowd again applauded the coach and what he said to them as he quickly had to leave for Miami for the weekend. He was thrilled to present himself as Perry County reminds him of where he grew up in Ohio.

“Oh it was great — I was trying to remember if I had been here before. When Speaker Householder asked us to do this it was a no brainer if we could. I grew up in a small town in Ohio, and that’s what it’s all about so it was great to be here,” Meyer told The Perry County Tribune. “It’s all about love and ownership and if you have that, you have a great team.”