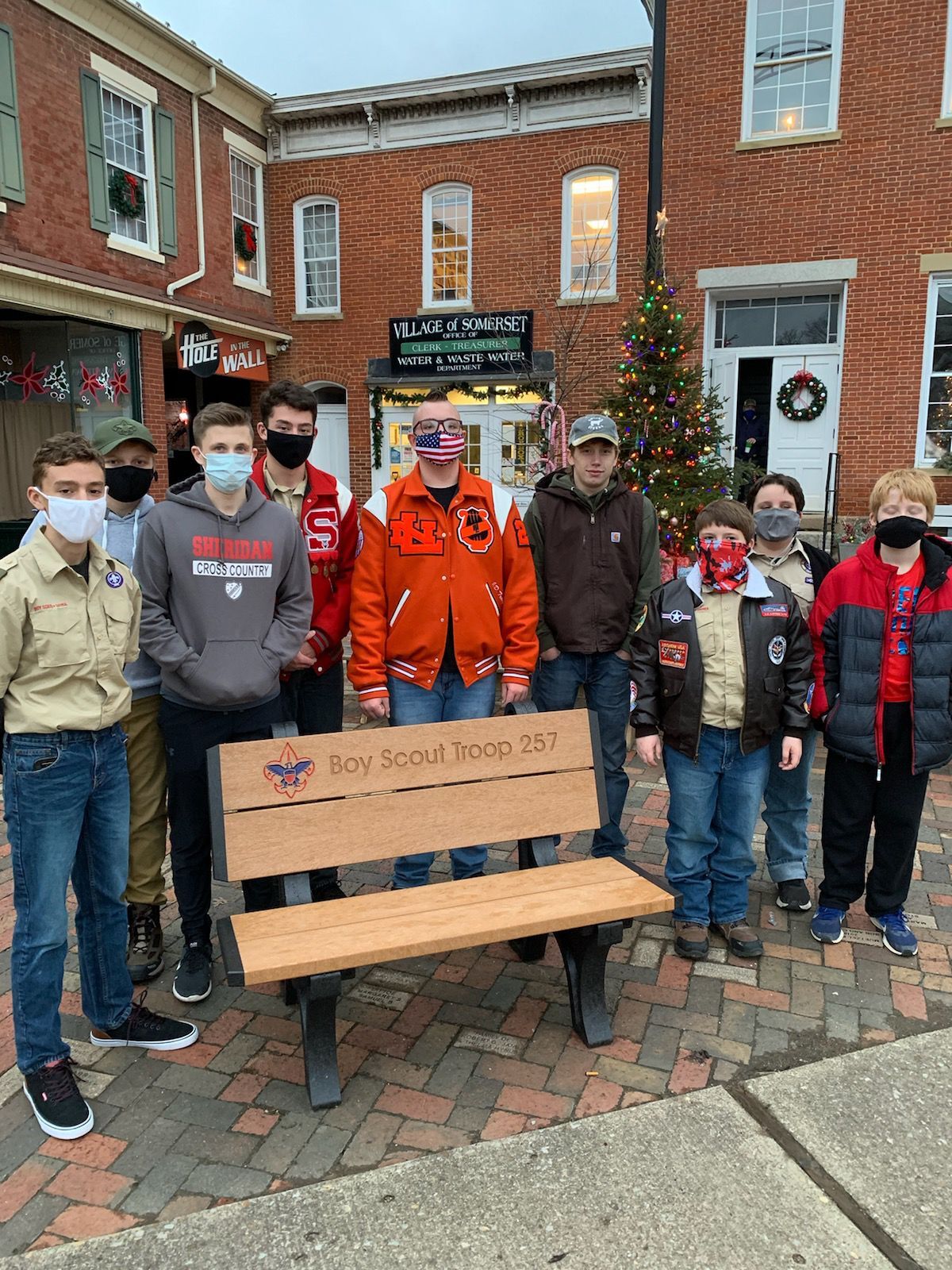 The Boy Scouts of Troop 257 stand behind the bench they placed on Somerset Square. The bench is constructed from recycled plastic bottle caps. Plastics R Unique of Wadsworth, Ohio created the bench from bottle caps recycled by Troop 257. 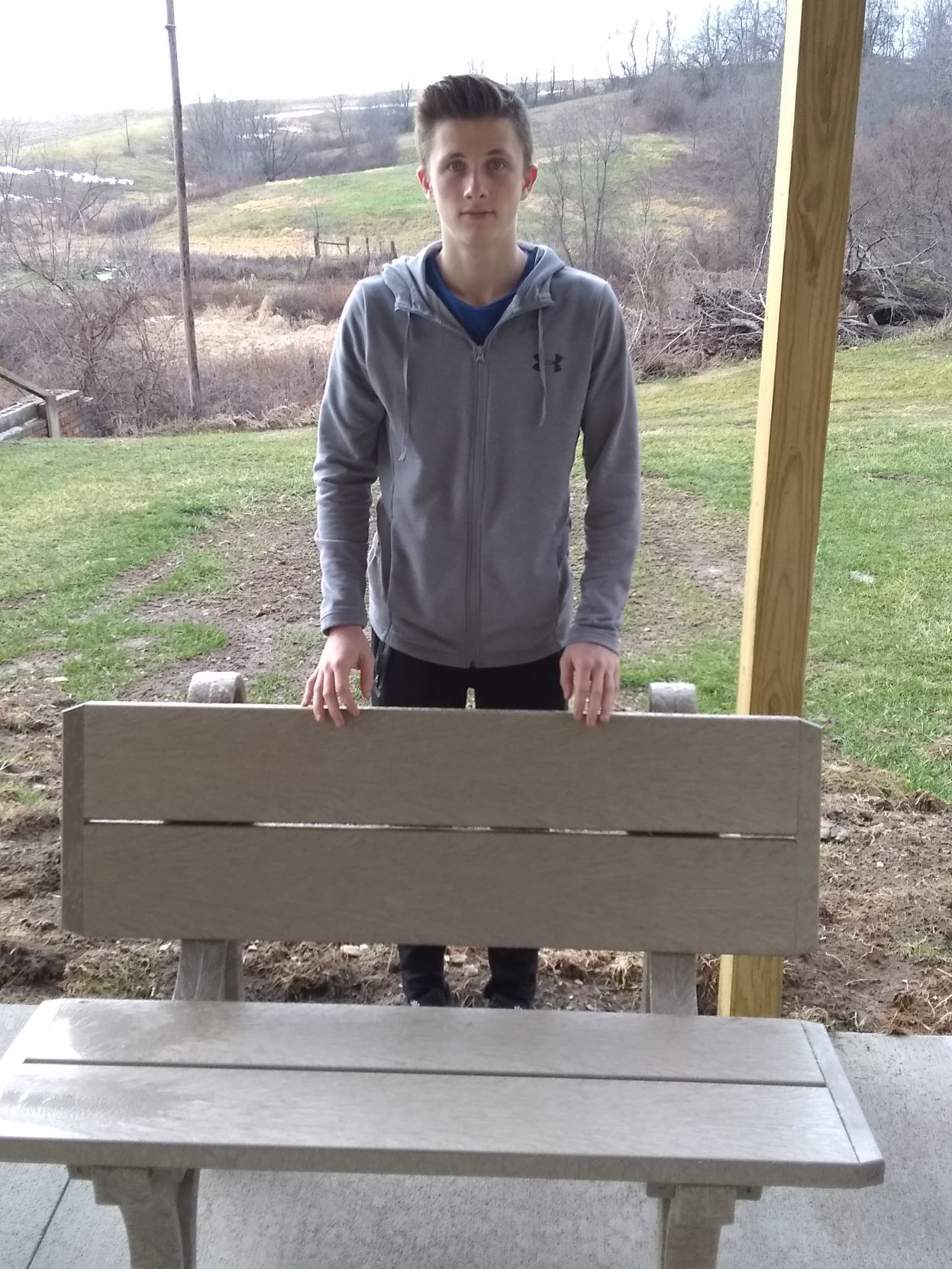 Elijah Devoll stands behind one of three benches now resting in the new gazebo at Fairview Assisted Living. He is a member of Boy Scout Troop 257 and is working to attain his Eagle Scout rank.

The Boy Scouts of Troop 257 stand behind the bench they placed on Somerset Square. The bench is constructed from recycled plastic bottle caps. Plastics R Unique of Wadsworth, Ohio created the bench from bottle caps recycled by Troop 257.

Elijah Devoll stands behind one of three benches now resting in the new gazebo at Fairview Assisted Living. He is a member of Boy Scout Troop 257 and is working to attain his Eagle Scout rank.

SOMERSET—A seminar conducted by Katrina Carpenter last February paid big dividends for Boy Scout Troop 257, Fairview Assisted Living, the Somerset Square, and one hopeful Eagle Scout to be. Carpenter is the education specialist for Perry County Waste Reduction and Recycling. The program she presented to Troop 257 highlighted recycling, and more importantly, reusing materials instead of letting them go to a landfill.

Amy Schmelzer, a mother of one of the scouts, was particularly impressed with Carpenter’s message. When she discovered there were companies that recycle caps from plastic bottles and convert them into benches, Troop 257 eventually found themselves up to their merit badges in bottle caps to the tune of 485 pounds. The project enabled Troop 257 to meet their environmental obligation.

Part two of this story involves Elijah Devoll who is a member of Troop 257 currently working to attain his Eagle Scout rank. He and his father had planned to build a gazebo at Fairview Assisted Living for his Eagle Scout project. When another entity, New Lexington’s FFA class, began building the gazebo ahead of Elijah, his fellow scouts shared their bottle cap bounty with him.

In a classic long story made a bit shorter, Troop 257’s effort placed a “bottle caps to bench” in Somerset Square while Elijah used grant money from Fairview Assisted Living to place three benches in the new gazebo.

While it took only a few paragraphs to reach the final result of the bottle cap project, it took nearly a year for those bottle caps to become benches. Once collected, the caps had to be sorted and cleaned. Any caps with metal components had to be discarded. Collecting the caps concluded on Oct. 24, 2020.

On Dec. 18, the scouts transported the caps to the Plastic R Unique plant in Wadsworth, Ohio, just south of Cleveland. Staci Noblett, CAP Project Manager for Plastics R Unique, says the company is preparing an ad campaign to promote the two-year-old recycling project.

“We have primarily relied on word of mouth for the CAP Program, but we are in the process of making a press release to promote it,” says Noblett. She said the idea originated from a local school group that had seen a plant in Indiana doing a similar project. When the school approached Plastics R Unique, Noblett says the company decided to move forward with the project.

Plastics R Unique has two qualifiers for their CAP Program. Under the heading Understood Promise, your organization must use the CAP Program as a teaching tool for hands-on experience of caring for our earth by having children do the work and own the bench.

Second is the Promise of the Mentor/Teacher. They must supervise those who are doing the work. Groups may be of any age or purpose. Noblett added that any group interested in this program needs to submit the name of their organization, the mentor’s name, and contact information to Plastics R Unique. You can find where to send your request at www.plasticsrunique or you can call Staci Noblett at 1-888-334-4820.

The company has a two-fold deal for groups wanting to trade caps for benches. A group can make a second trip to Wadsworth to pick up their bench made from the caps they recycled, or they can select benches already made on the day they bring in their plastic caps. The Troop 257 Scouts and Elijah took “door number two” and returned home with the benches.

Elijah had plenty of praise for everyone involved. First, he was extremely grateful to his fellow scouts for allowing him to be part of the project when his original plan for the gazebo project had to be scrapped.

“I worked with Tara Layne and Tara Moore at Fairview and they were very helpful. My scout leaders Ron and Charlotte Ashcroft and Ben Gibson helped me connect with Fairview,” Elijah recounted. He added that he especially appreciated all the help Amy Schmelzer provided, and his mother echoed the sentiment.

“Amy did all the heavy lifting on this project and deserves all the credit,” said Danielle Devoll.

“I wouldn’t mind doing it again, but not right away,” professed Amy with more than a hint of laughter in her voice.

Anyone interested in this Plastics R Unique effort should know that the deal is not strictly a caps for benches set-up. While the recycled bottle caps cover cost of the materials, the labor costs must paid by the group returning the caps. Etching on the bench is available for an extra fee.

Troop 257 paid $355 for the bench on Somerset Square while the three benches Elijah had placed at Fairview cost $785.

To Elijah and his fellow Scouts, thank you for your dedication to make a positive difference in Perry County.