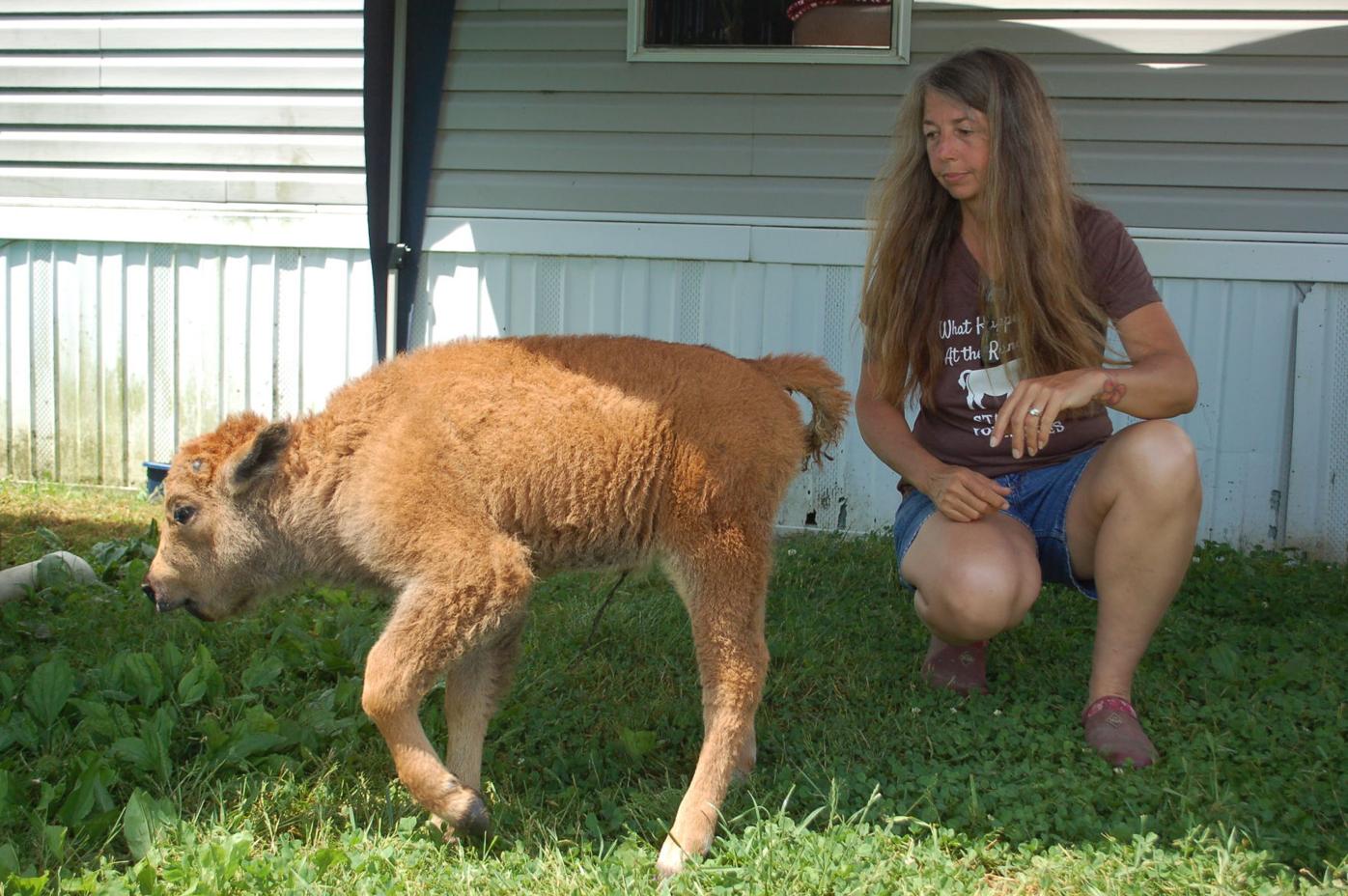 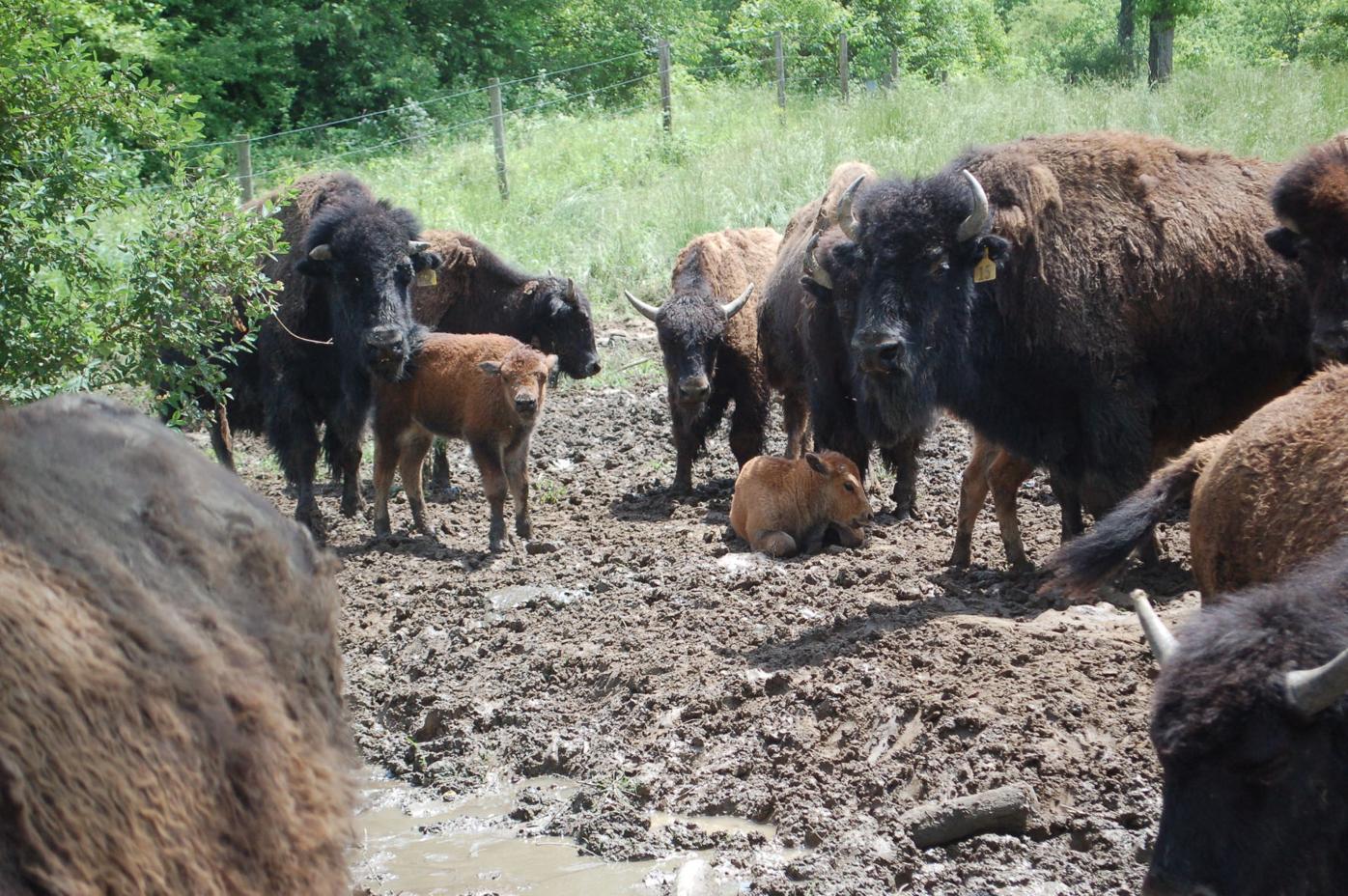 This is part of the herd at Cherokee Valley.

This is part of the herd at Cherokee Valley.

THORNVILLE – Cherokee Valley Bison Ranch rests in a remote valley of wildflowers and natural growth forest. Peacocks perch on fence posts, their tails cascading from the five-foot poles onto the grass below, their sudden squawks breaking up long stretches of silence.

The bison are quieter, but their presence can be felt. They stroll through the pastureland grunting and snorting in a low register, their hair shedding in matted rolls in the rising summer heat. In the middle of the herd, the light-colored blondish hair of spring calves occasionally peeks out from the sea of dark-brown adults as the young ones timidly survey the area.

Carrie Starr, co-owner of the ranch and director of region seven of the National Bison Association, expects to eventually have 13 calves born by the end of the season. The calves are born without assistance from people; they will typically weigh from 45–50 lbs. at birth.

This year the unexpected happened and the ranch had its first bottle-fed calf in 13 years. The calf, named “Peaches,” was born with a birth defect called “parrot jaw” that results in the top of her mouth being longer than the bottom. Because of this defect, Peaches was not able to latch on to her mother for feeding and was eventually abandoned. Starr recalled how she had to grab the young calf from the pasture.

“So I was very, very careful, and I ran in and I grabbed her and I took her over by the fence,” she explained. “And then I got my tractor and drove down on the outside of my fencing and scooped her up, and carried her up on my lap on my tractor up to here, so I could put her in that little area,.” As she spoke, Starr traced the path of the story with an outstretched finger.

Peaches will with luck be returned to the herd once she is bigger and healthier. Starr said it was touch-and-go when she began feeding Peaches, but the youngster eventually strengthened after two weeks of care. Other bison ranchers she knows have been able to gradually re-introduce bottle-fed calves to the herd after a few weeks. She thinks Peaches’ case will be the same.

“I’ve been taking her down and showing her to the herd, like we walked down a couple nights ago and they were talking to her,” Starr said. “And she was real curious about the other calves. Once they come back to this side of the fence I’ll keep her in her little pen there, and the herd will come up to the corral there to water and she’ll be right next to them. I’m hoping she’ll talk to them and whatnot.”

Bison, unlike cattle, are independent livestock. Starr said that people have been farming bison for only about 200 years. Because of this, they have not been domesticated to the extent of other animals and can take care of themselves with limited human influence. For example, cattle breeds such as Black Angus, when being bred, need help giving birth because selective breeding and overfeeding makes their musculature too thick for the calf to be easily birthed. By contrast, bison naturally undergo a thinning process before giving birth that allows the calf to be born without the help of a handler and with limited discomfort to the mother.

“Raising bison is 90% maintenance and 10% handling,” Starr said. “Some people call it retirement farming because bison don’t have to be handled like cattle.”

This does not mean raising bison is easy; Starr admits the retirement farming statement is partly a joke. While the bison take care of themselves, they are not nearly as calm or gentle as cattle. Starr said for her own safety, she tries her best not to get behind the fence with the bison. This is especially important now during calving season. Starr said someone she knew was injured two years ago when inspecting a calf they thought was separated from the heard. Little did they know the mother was just on the other side of the hill, and attacked in defense of her child.

Most of the effort in raising bison comes from repairing the tall, high-tensile electric fencing and guiding the bison to different pastures before closing them in the pasture, in a method known as rotational grazing.

When initially getting into bison herding, the high management cost was the biggest hurdle for Starr. “At the time I was a single mom, and I didn’t think it would happen, because everything about bison is expensive,” she said. “The fencing is expensive, the handling systems are expensive, and then the bison themselves are expensive.”

The bison are 100% grass fed. Starr said they tried grain feeding them, but eventually settled on an all-grass diet. They are not given any antibiotics unless sick. Any medication given to bison are the same as those given to cattle, but a veterinarian needs to be consulted beforehand because medicine is not used as intended. There is no medicine specifically developed for bison, but they are similar enough to cattle that cattle medicine often works. Fortunately, because bison ranching is not a commercially large enterprise, diseases are relatively uncommon due to most bison being raised in open areas.

Starr receives phone calls all the time from people asking her how to get started raising bison and occasionally teaches classes on bison ranching. She sells her product both at her home and to select groceries around the state. She plans to open her ranch to camping via Hipcamp someday soon as well.