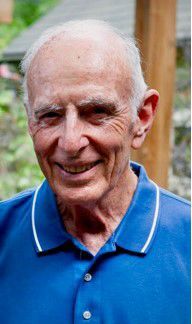 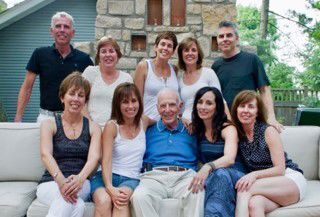 To plant a tree in memory of Bill Mooney as a living tribute, please visit Tribute Store.
1 of 2

“You’re the best” were words Bill Mooney frequently said, whether you were a longtime friend, family member or new acquaintance. They were always heartfelt and represented his positive daily outlook. He loved life and all of the people in his.

Surrounded by the love he cultivated throughout his long life, William J. Mooney (Bill) died peacefully in his home on Dec. 23, 2020. He leaves behind a remarkable legacy of character and faith through his loving children, successful business, community leadership and the countless people he befriended. To those who knew him, Bill was a role model for how to be a better human being. He was a gentleman and a gentle man. Bill was 93.

Bill was born the fifth of seven children on May 6, 1927 in New Lexington, Ohio. He proudly lived the majority of his life there and was successful by almost any measure. Professionally, Bill started working at STAR Engineering (a company his father founded) at the age of 14. After graduating high school and serving in the U.S. Navy, he earned a degree in mechanical engineering from The Ohio State University and returned home to work alongside his Dad and four siblings – Dan, Paul, Fred and Libby. In time, Bill became president of STAR, a role he didn’t always relish because the ups and downs of entrepreneurship could be challenging. Bill persevered, though, and worked at STAR for over 60 years before passing the reins to his sons, John and Chris, and nephew, Tom. Today, STAR Engineering continues to thrive and serve customers around the world.

Bill was successful in love as well. He married the love of his life, Elle Smith, in 1950 and they embarked on a new life together. He thought it would be nice to have two children, Elle thought four would be nice, so they had 10! Bill delighted in being the father of a large family and would sometimes joke, “I wouldn’t pay a nickel for another, but I wouldn’t trade one for a million.” Bill also had a great sense of humor. And high standards. He and Elle decided early on that all of their children would go to college and, indeed, they did. Bill and Elle were happily married for 43 years before she died in 1993 of complications from rheumatoid arthritis. Despite his grief, Bill was able to find love again and married Kate Johnson, a friend and neighbor from his childhood. They had many happy years together that included a lot of travel, a little dancing, OSU football games and big band concerts.

In addition to his family and business, Bill was devoted to his community. He was an active member of St. Rose Church, serving as a commentator for many years, participating in annual silent retreats, and attending mass almost daily. Doing so brought him inner peace and fostered his sage wisdom. “Sometimes you have to be quiet to hear the answers,” he would say. His Catholic faith was a guiding force in his life and contributed to another defining characteristic about Bill: generosity. He was generous with both his time and money. Bill routinely and quietly supported numerous charities and people in need. He also served on the board of directors at BancOhio National Bank and Good Samaritan Hospital. Additionally, he was a 20-year member of the school board for New Lexington High School and Tri-County School.

Bill wasn’t all work and no play, though. He found time to do many things he loved. Beginning in the 1970s, he was an avid runner and, over time, became a daily walker. He loved a cold glass of beer, Spanish peanuts and almost any salty snack. Bill was also a proud Irishman with a particular fondness for the color green. This helps explain his mostly green wardrobe, impeccable lawn, and the green shingle roof on his home.

Bill’s family is forever grateful to all of his caregivers, especially Julie, Tanya, Sue, Laura and Melissa for the love shown to Bill, as if he were a part of their own family. Special thanks to Jimbo and Nancy Russell for the loving friendship and support to Bill over the years. Additional thanks to Fair Hope Hospice for the empathy and care shown during Bill’s last days.

A celebration honoring Bill’s amazing life will be planned post-COVID when family and friends can safely come together. In the interim, if you would like to honor Bill’s life, please consider a contribution to St. Rose Church or the Alzheimer’s Association. Or, say a prayer. He would love that.