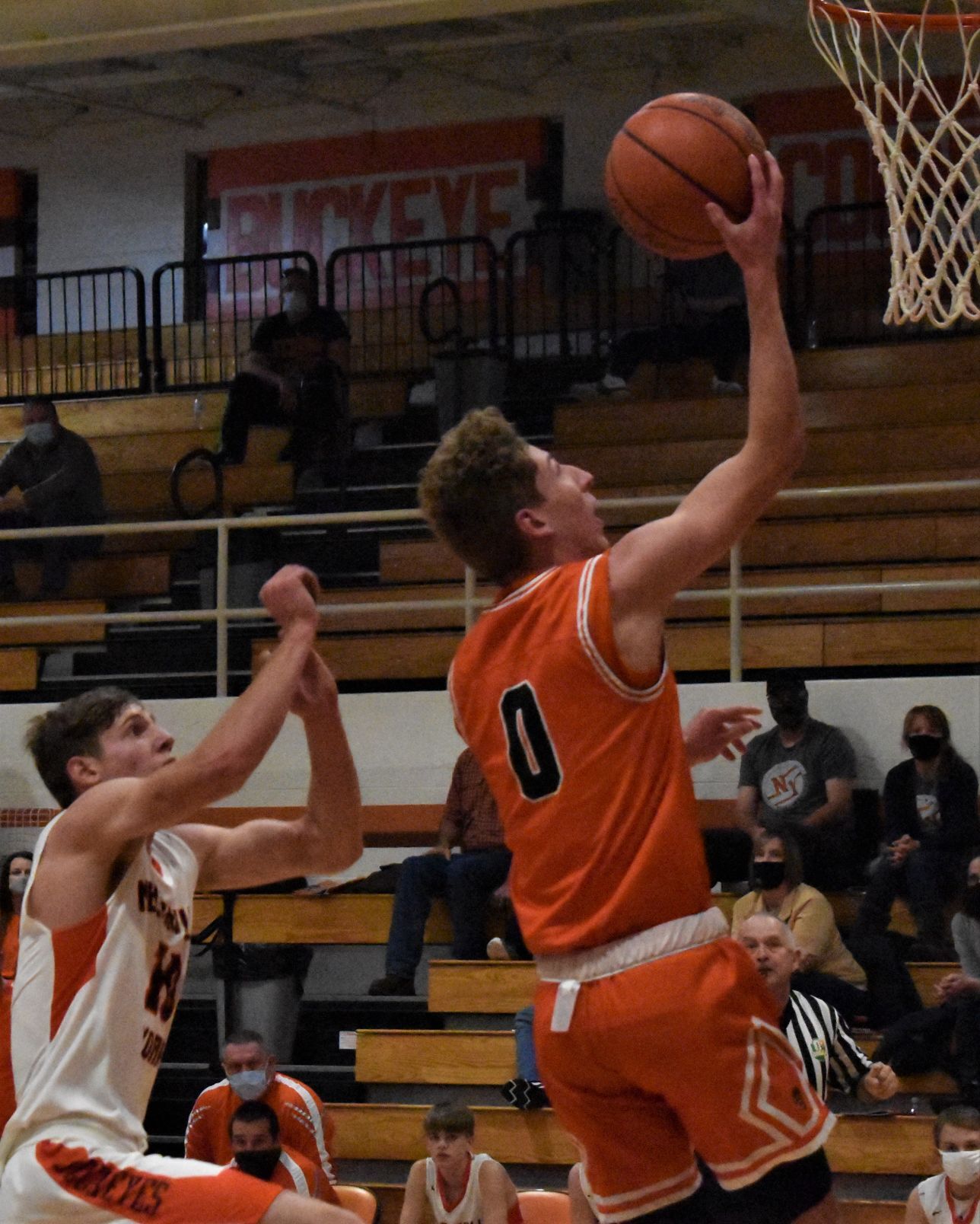 After a possession steal, Brady Hanson goes for two in the first half against Nelsonville-York. 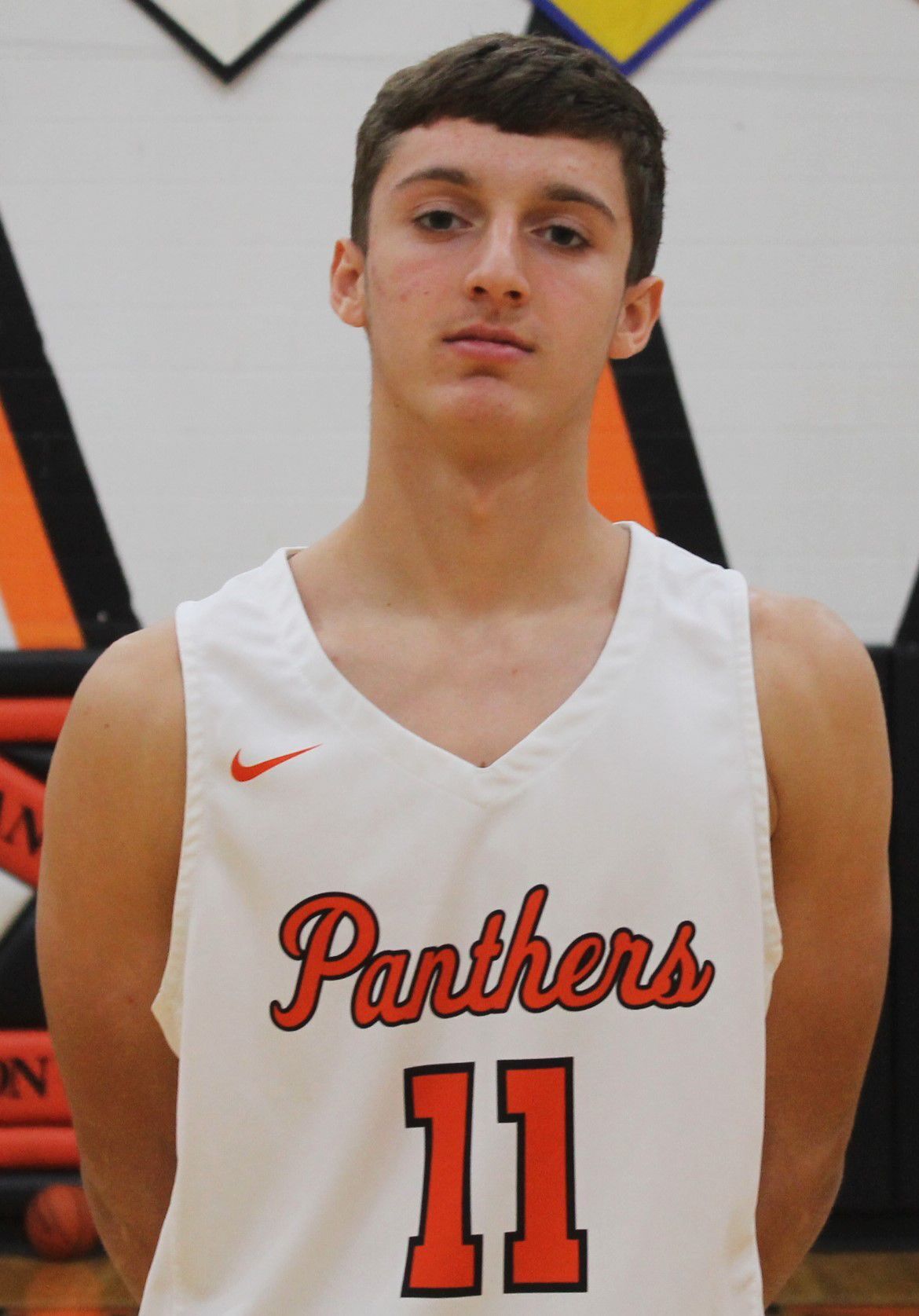 After a possession steal, Brady Hanson goes for two in the first half against Nelsonville-York.

NELSONVILLE — The Panthers took control of their opening-season game against Nelsonville-York with a determination to take and hold onto the lead throughout the entire game on Dec. 1 and got the 53-43 win.

New Lexington’s scoring started a minute into play in the first with a layup from Braden Agriesti followed by another from Lukas Ratliff one minute later.

The Panthers were putting on a defensive-strategic game by holding Nelsonville behind the arc for a full minute. The Buckeyes were scoreless until there was one minute remaining in the first period.

The Buckeye three pointer came after senior Logyn Ratliff was blocking Nelsonville’s passing plays for a New Lexington possession, as well as two more layups from Brady Hanson and Lukas.

The Panthers continued an offensive period with long passes for in-the-paint shots from Lukas, as well as one from behind the paint for the younger Ratliff for three more.

The Buckeyes added another five points before the quarter buzzer, but New Lexington had a good-running 13-8 lead.

The second period began with Hanson getting aggressive on defense with a steal for possession, low bouncing it to Agriesti for the two points in the box.

The Buckeyes had a strength of three-point drains, which they showed their skill at in the second.

Although Hunter Kellogg, Hanson and Lukas each had three-point drains before the half, Nelsonville 20 points at the buzzer.

To keep the lead, New Lexington added a few field goals from Agriesti and Logyn for the 30-20 lead at the half.

The Buckeyes started the second half with a three-point swish and quickly added another with Logyn completing a layup in between.

Agriesti got two shots on the free-throw line to add two to New Lexington’s score and Hanson added a quick two points to have a 38-30 lead over Nelsonville.

The Buckeyes took a steal from Isaac Dick to get another two on the board and just before the buzzer, they added another field goal for a closer 40-36 score with the Panthers still ahead.

The Panthers showed aggression again in the final period with a start-up steal from Kellogg who attempted the two points, but Nelsonville had the block.

In New Lexington’s favor though, the Buckeyes lost their swish skill for the three-point shots, although that did not stop them from making the attempts.

Hanson was having a day on the free-throw line, making one for three attempts in the period.

The Panthers witnessed one more three-point drain from the Buckeyes, but they ended their night by running the clock from behind the paint for a minute, followed by four free throws from Logyn, all drained.

With a 53-43 score, New Lexington completed their season-opening night with a 1-0 record.

Hanson and Lukas were the leading scorers for the Panthers with 14 each. Nelsonville’s leading scorer, Ethan Gail, completed the night with 16 points.