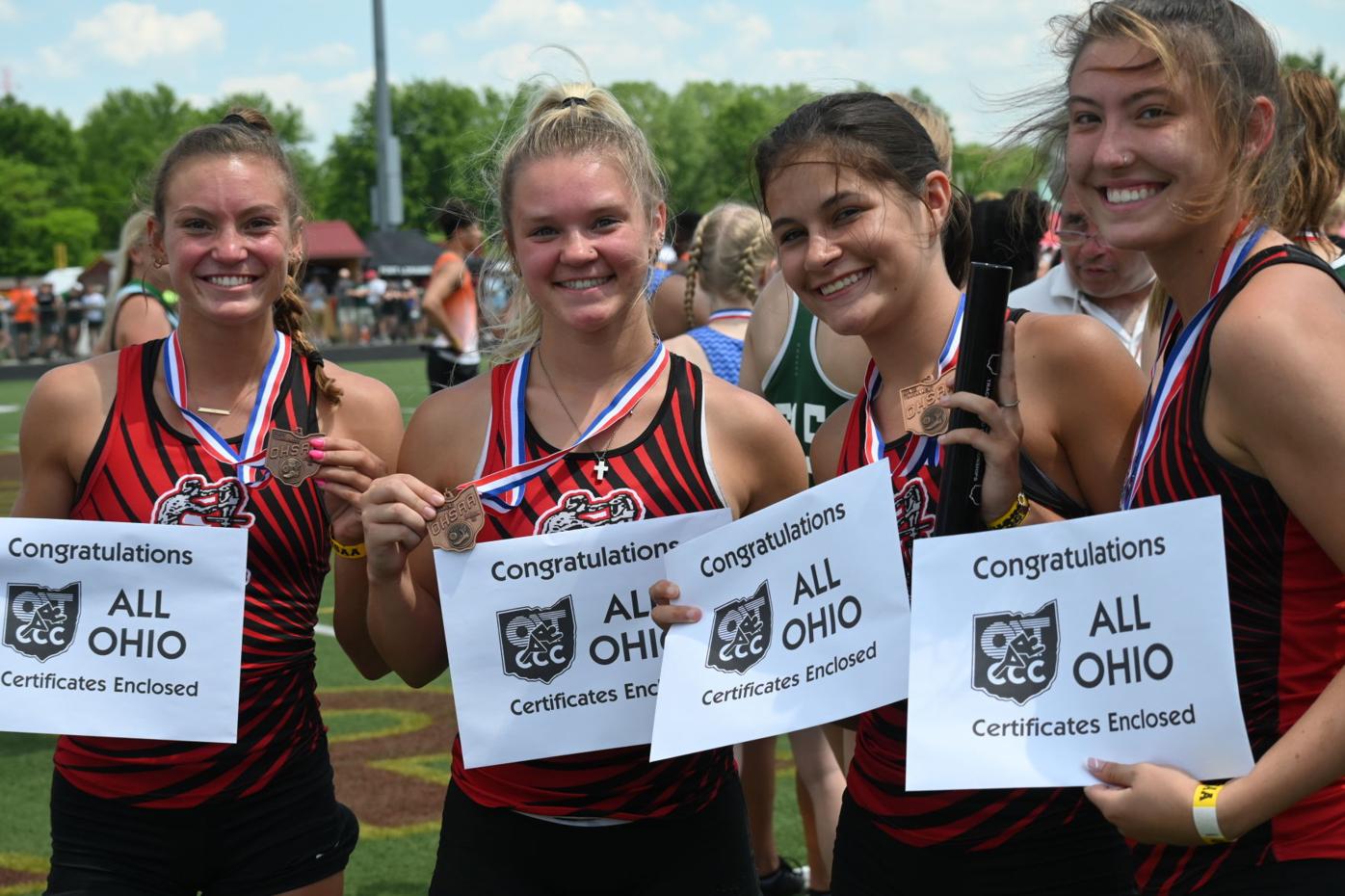 From left, Greta Barker, Logyn Chamberlin, Lelila Kennedy, and Halleigh Willison with their All-Ohio awards after placing sixth in the 4x100-meter relay. 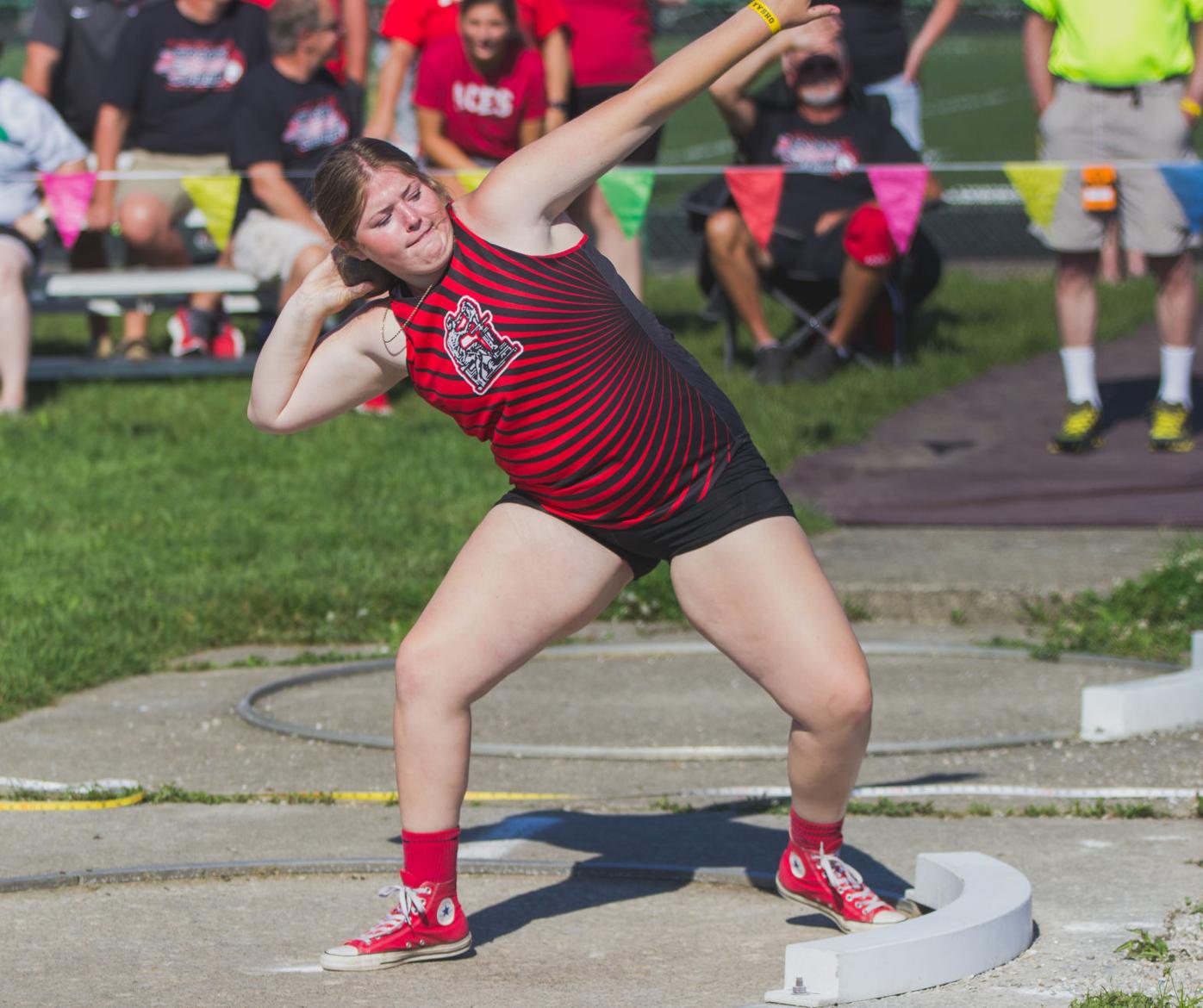 Grace Frame competes in the shot put at the Division III State Championships.

From left, Greta Barker, Logyn Chamberlin, Lelila Kennedy, and Halleigh Willison with their All-Ohio awards after placing sixth in the 4x100-meter relay.

Grace Frame competes in the shot put at the Division III State Championships.

WESTERVILLE – Greta Barker, Halleigh Willison, Logyn Chamberlin, and Lelila Kennedy will all live in the Crooksville history books after breaking more records at the state championship meet on June 4-5.

While they only teamed up once, the four seniors overcame tough competition in the 4x100-meter relay finals. They finished sixth with a time of :50.18, breaking their own school record of :50.67 (set just one day prior).

The sixth-place finish saw them earn All-Ohio honors and make the podium.

“It’s just so great to get here,” Chamberlin said. “All the hard work we’ve put in: handoffs, weightlifting. The odds were stacked against us when we came out here, (but) we got on the podium, and it all worked out in the end.”

While Chamberlin, Kennedy and Willison had only the relay, it was Barker who earned All-Ohio honors in three other events, including a school record in the 100-meter dash.

Barker finished second in the 100-meter dash, as the race was decided by .08 seconds, with Margaretta’s Kenna Stimmel taking the title. Barker’s time of 12.27 breaks her own school and personal record of 12.28 set at regionals.

Barker also did damage in the field, jumping a high of 16-10.75 in the long jump to secure sixth place and another All-Ohio honor. Mackenzie Hartman of Seven Hills earned first-place with a jump of 17-8.75.

“My jumps were not my highest jumps, but they were also really consistent,” Barker said. “(They were) enough to place, actually, which I was really happy for. The wind was not great, but I was really happy that I could jump well out here.”

Now a three-time All-Ohioan on the day, Barker’s last event was the 200-meter dash. A time of 26 seconds flat earned her fifth place and another podium spot, cementing All-Ohio status.

“It’s my last high-school race, so it’s really surreal,” Barker said. “I didn’t think it would ever come, but I just wanted to run a good race again.”

Junior Grace Frame also competed at states, earning 13th place in the girls shot put with a final distance of 34-5.

Overall, the Lady Ceramics finished seventh out of 63 represented teams with 18 total points.

“It’s a great day to be a Ceramic,” Head Coach Scott Houk said of his four seniors. “(I’m) extremely proud of these girls, they will do anything you ask them to do and I’m just sad it’s over, to be honest with you. They’re a joy to be around and it makes coaching fun.”