Kylan McClain reaches for two in the first half against Wellston. 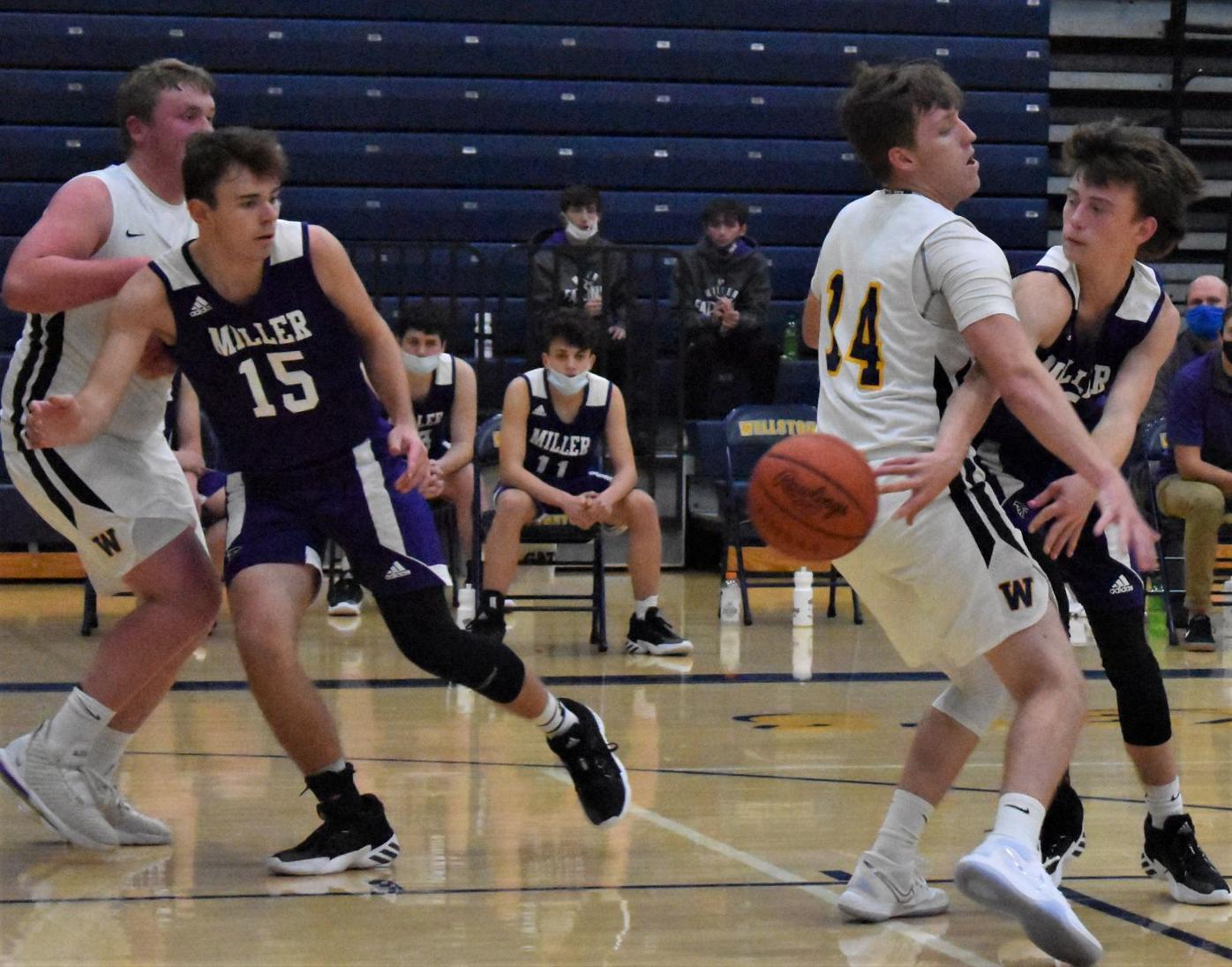 Hunter Griffith works around his Wellston defender to shoot a low pass to Clay Brown in the second half.

Kylan McClain reaches for two in the first half against Wellston.

Hunter Griffith works around his Wellston defender to shoot a low pass to Clay Brown in the second half.

WELLSTON — Despite a second-half comeback, the Falcons fell in a fast-paced fight, 43-59, in their road game at Wellston on Dec. 8.

The Golden Rockets had come to play right from the tipoff with three straight shots from layups before Miller’s Quin McCabe scored his first three of the game.

Wellston was catching onto Miller’s quick passing plays and took advantage with at least three steals in the first period and brought them down the court for another two points to their score.

The Golden Rockets had some luck behind the arc as well with two three-point shots completed, but Tre McCoy added a field goal and Kylan McClain swished two shots from behind the arc before the end-of-the-quarter buzzer and a 11-20 score showed.

The Falcons were under the net more often in the second with McClain reciprocating Wellston’s layup with one of his own at the 6:43 mark.

It was back and forth with field goals below the net with Hunter Griffith adding in his shot from a rebound from McClain’s three-point attempt.

The Golden Rockets were keeping their chances behind the arc for three three-point drains in a row before McClain added another two for Miller inside the paint.

McCabe kept Miller’s offense going with a layup and another three before the end of the first half with a 24-31 score.

The Falcons brought the score closer with three field goals inside the paint from McClain for a 33-39 score.

The Golden Rockets extended their score a little in the third with three layups, one foul shot and a three before the buzzer with a 33-47 score.

McCabe continued his three-point routine with one at the 7:19 mark left in the game.

Wellston was relentless under the net still with two layups and added a three. They attempted their shutdown dunk, but holding onto the rim resulted in a technical, which gave McClain the opportunity to go 2-2 from the free throw line.

He had another chance not long after for another two points added to Miller’s score for a 40-56 board with a little over three minutes remaining of play.

McCoy added three more points before the final buzzer and Wellston, after missing foul shots all night, got one on the board, along with a final layup for a final score of 43-59.

McClain was Miller’s leading scorer with 20 points, followed by McCabe with 14. McClain was also the top scorer of the game.