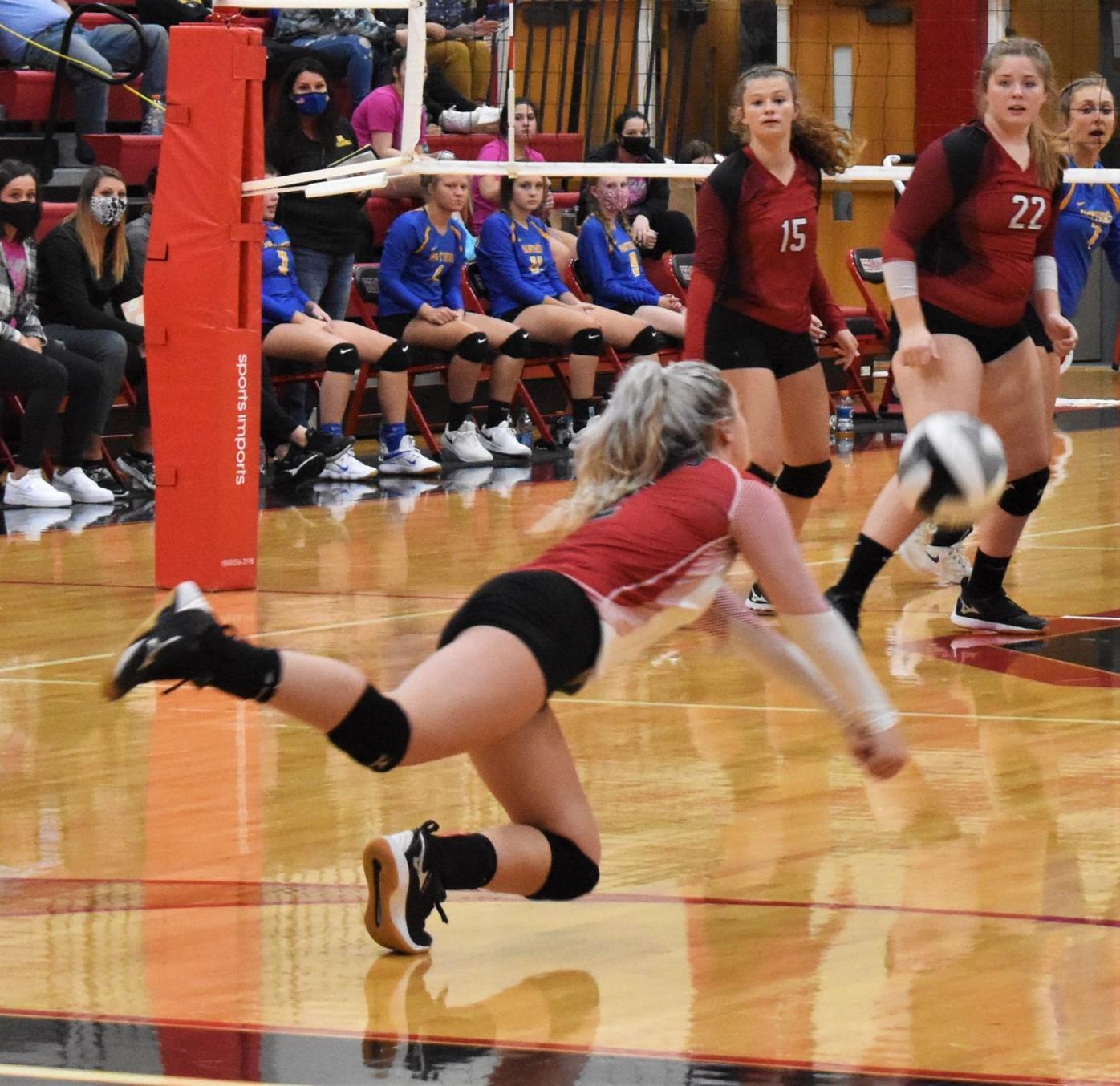 Logyn Chamberlin dives for the dig in the first set. 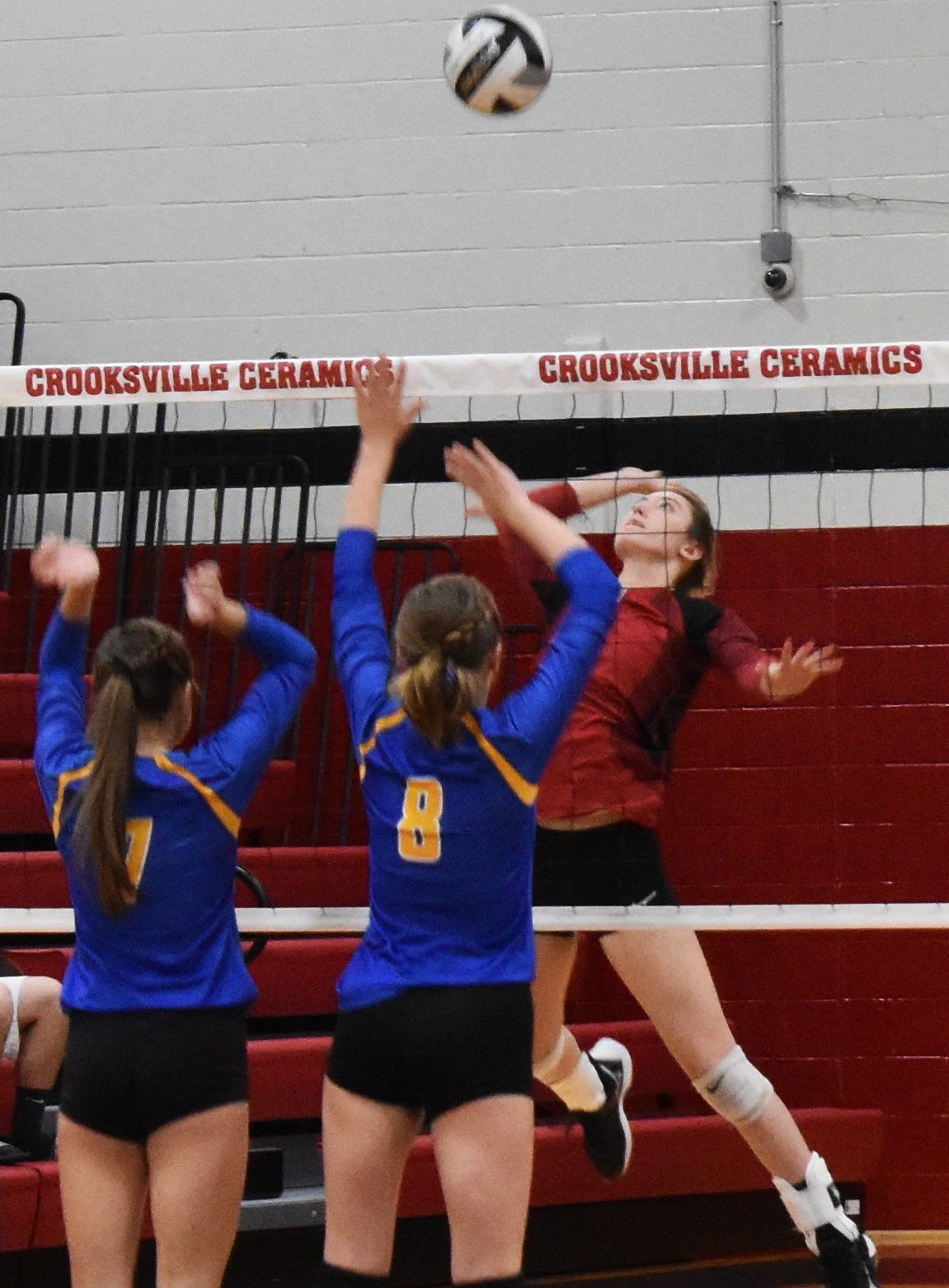 Haleigh Willison jumps for the middle kill in the third set. 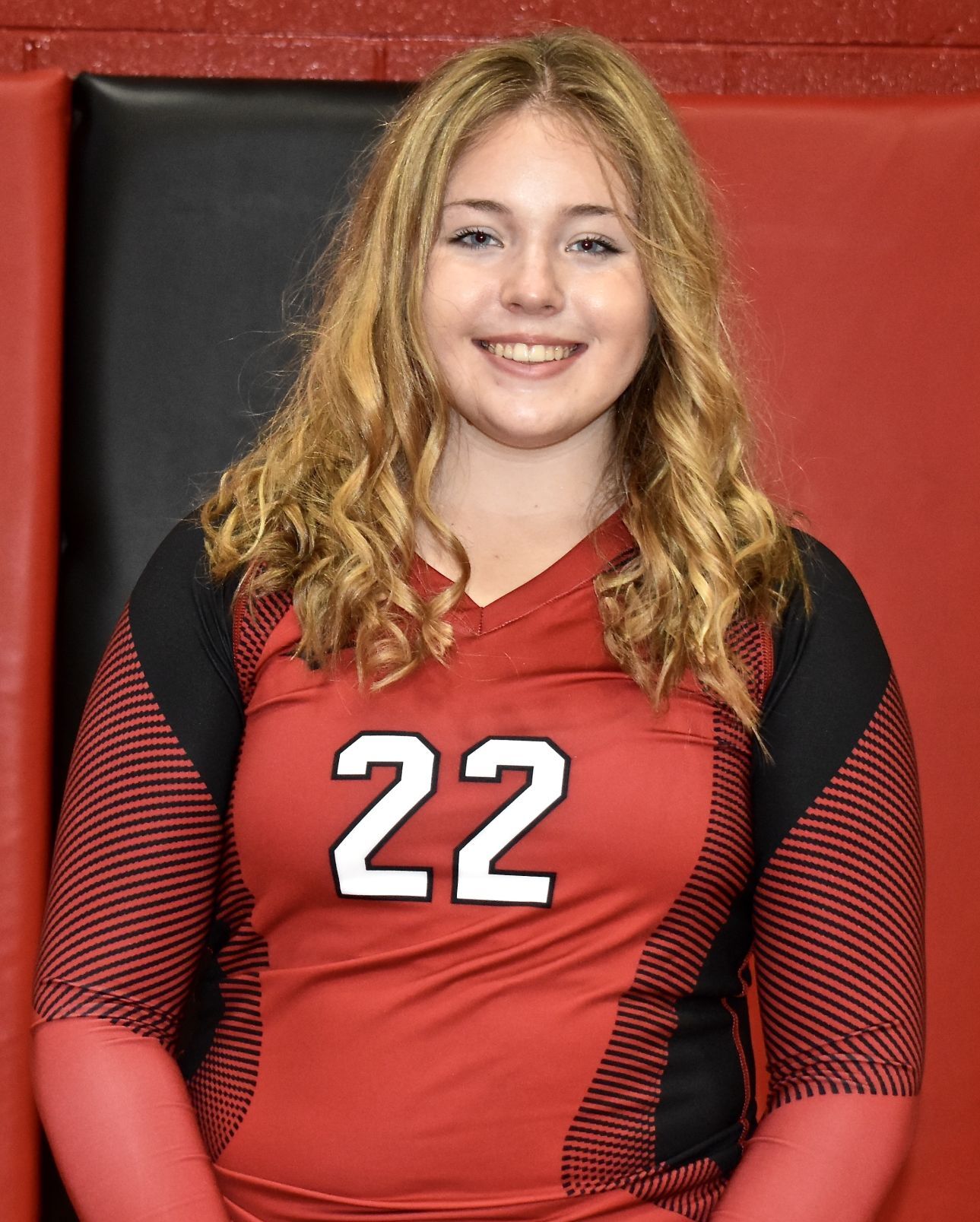 Logyn Chamberlin dives for the dig in the first set.

Haleigh Willison jumps for the middle kill in the third set.

CROOKSVILLE — The Lady Ceramics ended their regular season in five fighting sets against Maysville on Oct. 15, but fell in an unfortunate loss in the fifth set.

The first set was Maysville’s for the taking, but Crooksville did not make it easy as they were neck and neck the entire set with back-and-forth points.

At the front, Haleigh Willison and Grace Frame were working together to find times for kills and pushes for a Crooksville points.

Willison got a Crooksville lead with a kill and Frame pushed a point for tie a fee plays alter.

Frame kept her rhythm going with tips and blocks for Crooksville to have a 6-5 lead over Maysville.

The volleys then started and that was when the set got interesting as far as defensive work from Leilia Kennedy and Logyn Chamberlin in the back diving for digs.

Maysville did take the first-set win over Crooksville, 25-18, with a block from Willison heading out of bounds.

The Lady Panthers started with a couple kills for the lead, but Willison quickly found points for her Lady Ceramics with multiple blocks in a row.

Senior Alli Theisen and Frame were the offense with kills for a 13-17 score, but Maysville still had the lead.

The Lady Panthers kept that lead, despite Willison adding in kills, and the set score showed a slight comeback for Crooksville, but still a 20-25 loss.

The third set was when Crooksville’s work showed with an immediate first-point kill from Willison, followed by another from Frame.

The Lady Ceramics used everyone for the set win with Taisia Riggs tipping a point and Hannah Taylor getting another kill.

Chamberlain added an ace as she was the defensive star in the white jersey. Maysville had a volley going with Crooksville, but a slight misfire on their end resulted in a net hit and a Crooskville point. The score was 19-13 in favor of Crooksville.

The Lady Panthers were flusters and it showed as hey could not keep a hit inside of the lines.

Crooksville finalized their 25-21 set win with a kill from Willison and a tip from Frame.

Crooksville kept their luck rolling into the fourth set with the first point in their favor from a Frame kill.

Frame added more offensive strategy with tips that she knew were effective against the Lady Panthers.

Maysville was still misfiring with net serves, and when they did add in a good shot, Willison was at the net for the block.

Between an ace from Kennedy and a tip point from Willison, the set was tied 10-10.

The Lady Panthers were losing their patterns again with multiple net hits and out of bounds shots.

Frame and Willison prepared their offensive shots for the finalized set of another Crooksville win of 25-21. With a 2-2 overall, the night was heading for the fifth set.

Maysville seemed to have let loose in the fifth set as they came out firing with a laser of a kill for the first point.

They continued their mistakes of net serves and out hits, yes, but they made up for them with powerful kills that they had not shown they were capable of all night.

They held Crooksville to only five points, one of which Kennedy added for her team.

With a final of 5-15, Crooskville’s night ended, as well as their MVL season in their final home game.