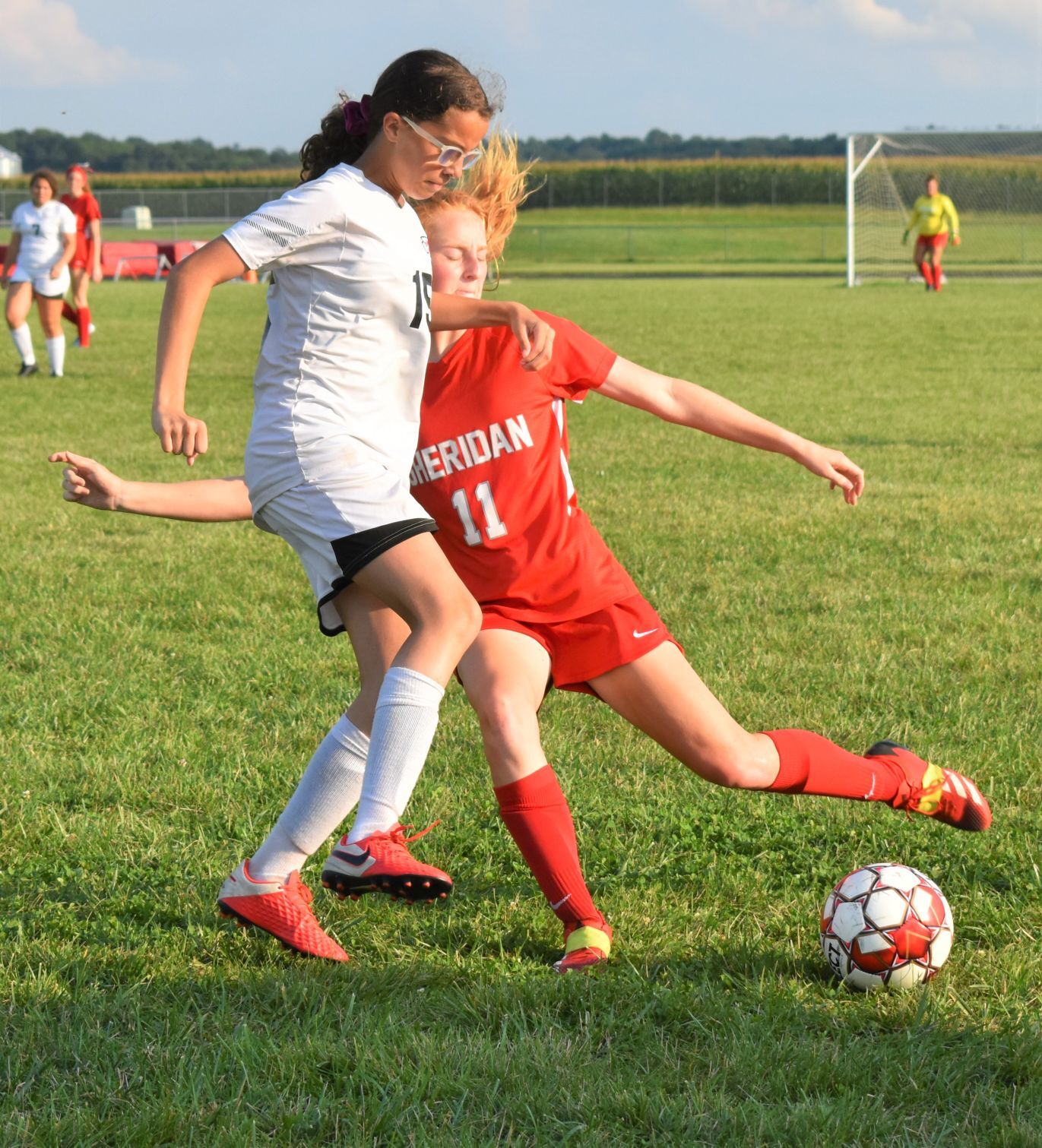 Natalie Shriner kicks around her Coshocton defender in a collision in the second half. 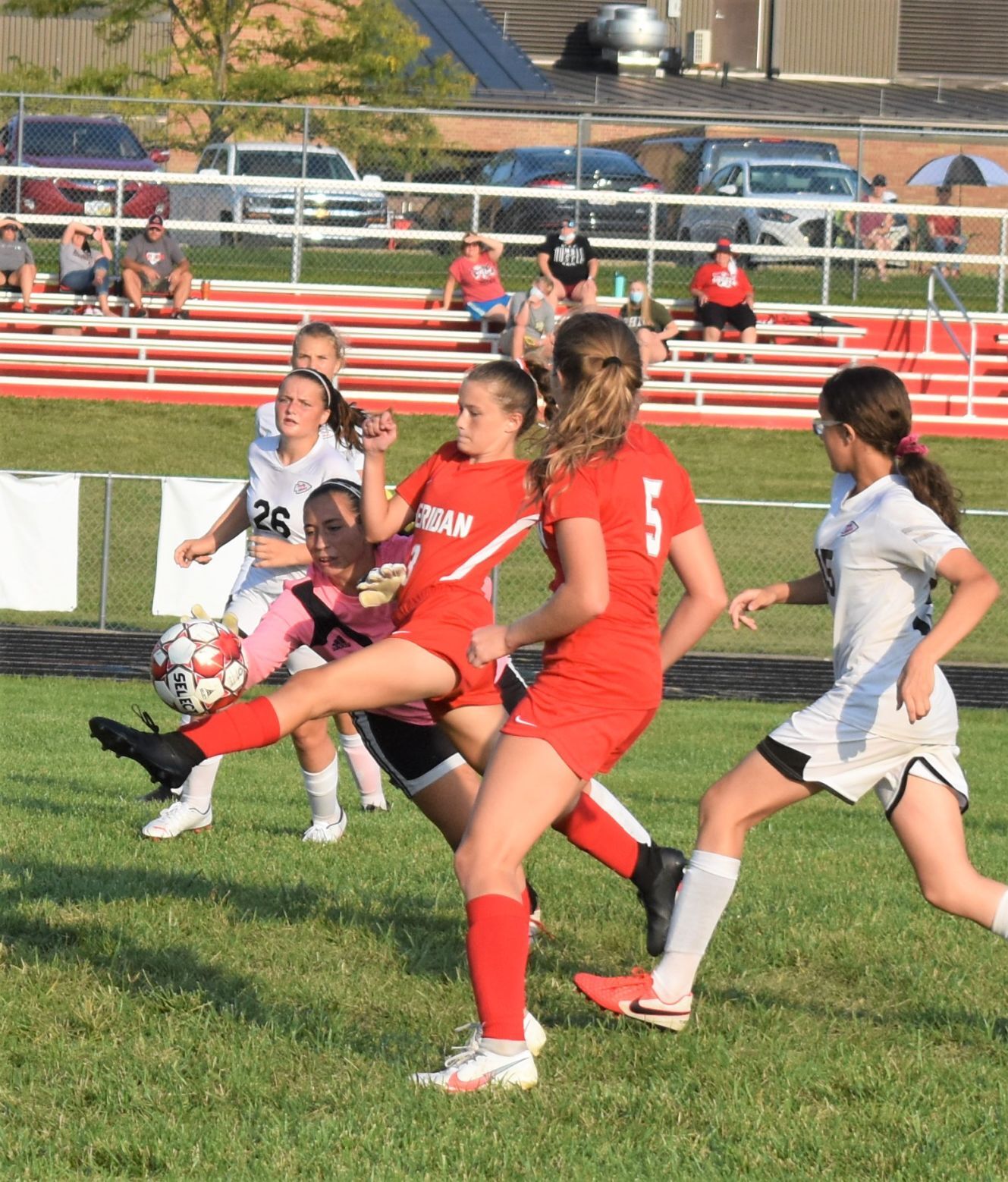 Delaney Cyrus kicks the ball nearly into the goal in a mosh of Coshocton defenders.

Natalie Shriner kicks around her Coshocton defender in a collision in the second half.

Delaney Cyrus kicks the ball nearly into the goal in a mosh of Coshocton defenders.

THORNVILLE — The Lady Generals, coming off of a Senior Night win earlier in the week, had the motivation to take on another competitor, Coshocton, on Sept. 10 and ended the night in an 8-8 tie.

In the first half, Julie Nichols had one thing she needed to do, score one within five minutes. That obviously wasn’t a big enough task for her to accomplish, so she put two in the net within the first two minutes of play for an immediate 2-0 lead for Sheridan.

Coshocton added on themselves the board at the 6:19 mark to get the one-point difference, but Sheridan was still wanting their relentless effort to show. To do so, senior Adisen Shroyer made a shot attempt two minutes later, but a good block from Coshocton’s goalie stopped Sheridan’s drive.

The Lady Generals did not find the net again until Natalie Shriner got the shot attempt after a handling call on Coshocton. With that, she gave her team the 3-1 lead.

Two minutes following, Coshocton kept the back and forth momentum and scored for the one-point difference again. They did something different though by stopping Sheridan’s turn and adding another to the board and put another one of their own past Riley Morbitzer in the net. Coshocton tied the game at 3-3 with just over 20 minutes left in the half.

In the net, Morbitzer made her fair share of blocks, and her teammates, Savannah Ramirez and Claire Shriner, were helping Sheridan with their push with two shot attempts in Coshocton’s goal.

On another penalty kick at the 28-minute mark, Natalie Shriner passed the test of pressure and hit net to get the lead again at 4-3.

Morbitzer added more blocks to her stats, but she could not stop them all as the Lady Redskins found net and another tie.

With two more attempts from Nichols and Natalie, Coshocton knew those were the two to defend against, but Nichols worked around them with just a little over six minutes left in the half and scored for a 5-4 lead.

Morbitzer found herself in a pinch with a penalty kick to face, which she successfully accomplished, but Coshocton’s offense was crashing in quick for the ball to bounce off Morbitzer’s block and they tapped it into the net for a 5-5 tie.

Nichols added one more attempt before the half, but a blocked shot ended at the whistle.

The second half did not change the back-and-forth mentality of either team, nor their drives.

Nichols kept her legs moving past defenders to score two, back to back. Her first one for the 6-5 lead was an easy roller, but her second at the 10-minute mark shocked all, even her.

Her shot was a curving sail to the top right corner of the net, and a bounce in lit up the faces of every Lady General on the field, and put the crowd on their feet.

Not even five minutes after the pick up, Coshocton found a goal for another one-point difference.

More excitement came when Shriner, Nichols and Kira Howe were crashing to the net, but a whole flock of Lady Redskins were with them.

The group of Lady Generals and Coshocton defenders moved as one to the goal line and all one could do was try to find the ball in the mosh of players.

Sheridan managed to inch the ball nearly across the goal line, but one mistake was made on a Coshocton defender, handling to prevent a goal that was otherwise going in — red card.

Shriner took the penalty kick for that and rolled it to the left side for an 8-6 lead for Sheridan.

Sheridan made three more shot attempts before Coshocton found, yet again, another one-point difference in score with eight minutes remaining of play.

With an 8-7 score, the Lady Redskins were not nearly done and shot past Morbitzer one last time to end the game in an 8-8 tie.