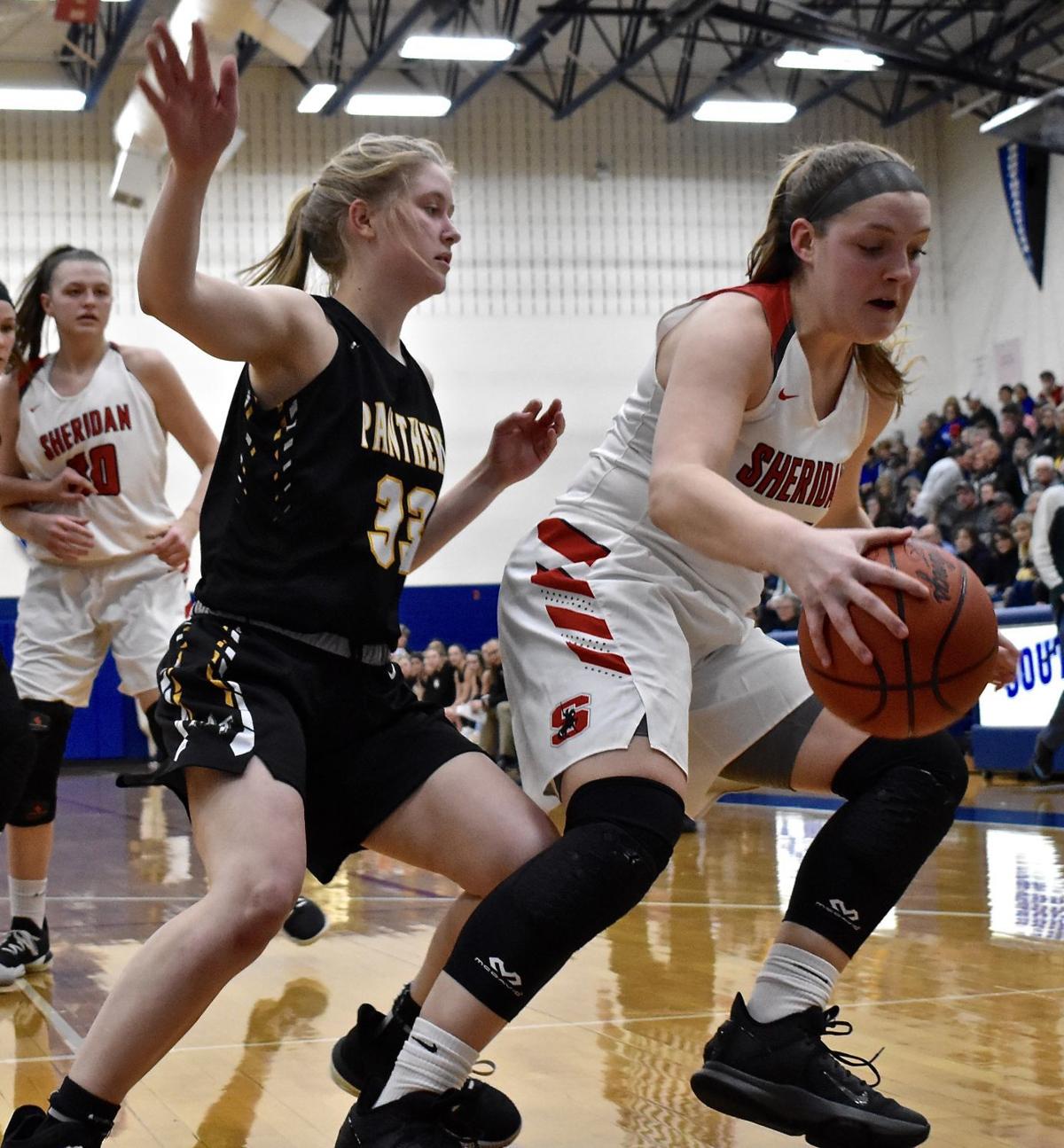 Kendyl Mick risks going out of bounds for possession in the third quarter. 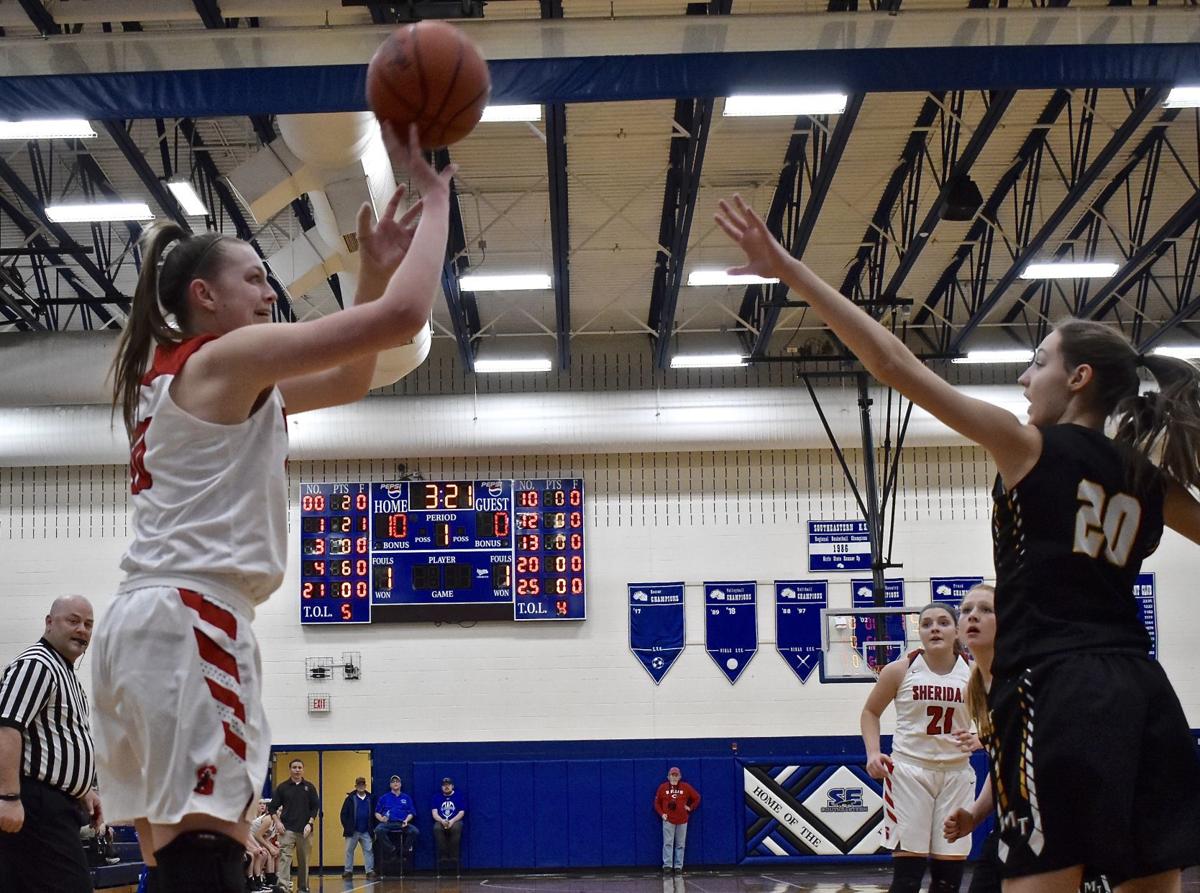 Faith Stinson steps back from the box for a two-point toss up over her Miami Trace defender. 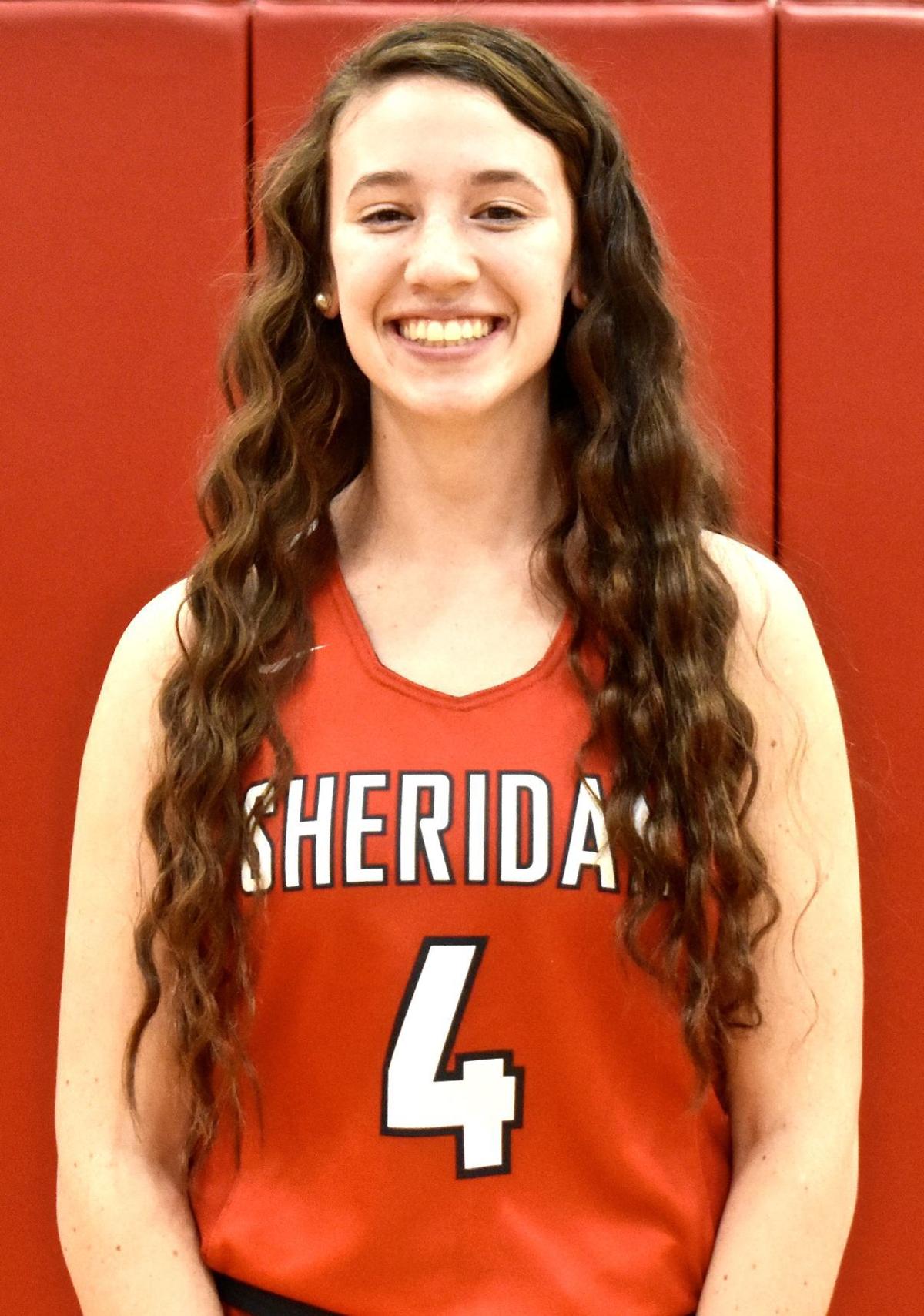 Kendyl Mick risks going out of bounds for possession in the third quarter.

Faith Stinson steps back from the box for a two-point toss up over her Miami Trace defender.

CHILLICOTHE — The Lady Generals continued their winning streak and paved a way to the District Final after taking the 41-25 win over Miami Trace in the OHSAA District Semifinal on Feb. 21.

With Faith Stinson back on the court, the Lady Generals were a completely different team than they were in the Sectionals.

Although her shooting was not as high scoring as usual, she brought the first points to the board for Sheridan with her layup to start the game.

Senior Aubrie White followed with a trick layup one minute into the game to get a 4-0 lead over Miami Trace.

Grace Conrad added two threes, back to back, to extend the lead before Miami Trace got to the basket.

Bailey Beckstedt and Stinson each added field goals from the shaded area and Beckstedt stepped back for a three before Miami got their first basket of the game at the 1:03 mark to get the end-of-the-quarter score showing Sheridan ahead, 17-2.

Sheridan’s defense held strong against Miami Trace until they worked around for a field goal at the 6:30 mark in the second quarter.

Kendyl Mick stepped in for her offensive additions with a three from the corner to lead to Beckstedt attempting a quick two, but missing for Conrad to rebound and get the two anyway.

The Lady Generals slowed their scoring down while Miami Trace added one more layup or a 22-4 score at 3:20 left in the half.

Conrad was in the shaded area, centered up to the basket, to toss up another two points.

With one more points from Mick at the charity line, Sheridan was leading 25-9.

Stinson compensated for her offense being a little off and was blocking every chance Miami Trace had of starting scoring plays.

At the half, Miami Trace only had nine points total to Sheridan’s 25, and six of those points for Trace were from field goals; the rest were foul shots.

Although Miami got a little more life in them for the second half, Sheridan’s defense was still holding them to under 10 points a quarter.

Trace finally reached the 10-point mark from a foul shot at 5:49, which was also the first points of the second half.

They rolled up their scoring to get to 15 points and mustered up strength on their defense to grab a couple steals from Sheridan’s offensive plays.

Although their defense showed life, their offense wasn’t waking up as they kept their shots missing consistently.

Adrienne Spicer got Sheridan’s first points of the second half after she grabbed a quick steal at half court to charge down to Sheridan’s basket and make the layup unguarded.

Sheridan’s two points of the quarter still were enough to hold the lead over Miami, 27-17.

Miami started big in the final quarter with a long-distance three to start their scoring.

Stinson was below the basket with intensity after missing her two shots from the charity line to toss up a fade-away shot for two points and a 29-20 lead.

Another unguarded layup was given to Beckstedt as she was isolated in her sprint down the court.

With a 31-21 lead, Sheridan had only two and a half minutes left of play.

For the majority of the remaining time, the Lady Generals were all too familiar with the foul line.

The Lady Generals completed their scoring as Abby Dupler swished a layup at the buzzer and ended the game 41-25.

The Lady Generals are to play in the District Final on Thursday, Feb. 27 against Warren. The game will take place at 7 p.m. at Southeastern High School.