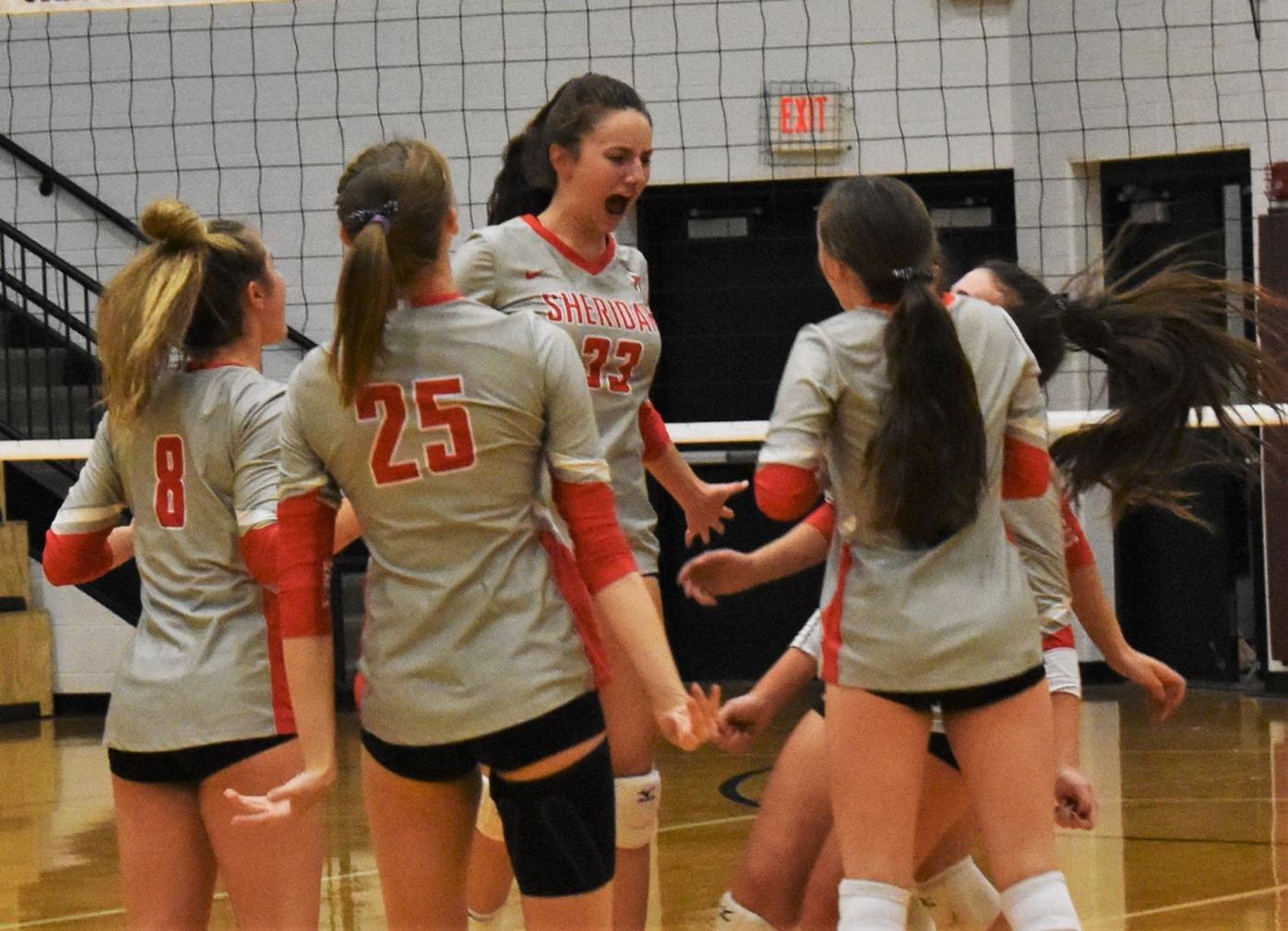 After a final point, the Lady Generals come to the center of the court to celebrate after defeating John Glenn in three sets. 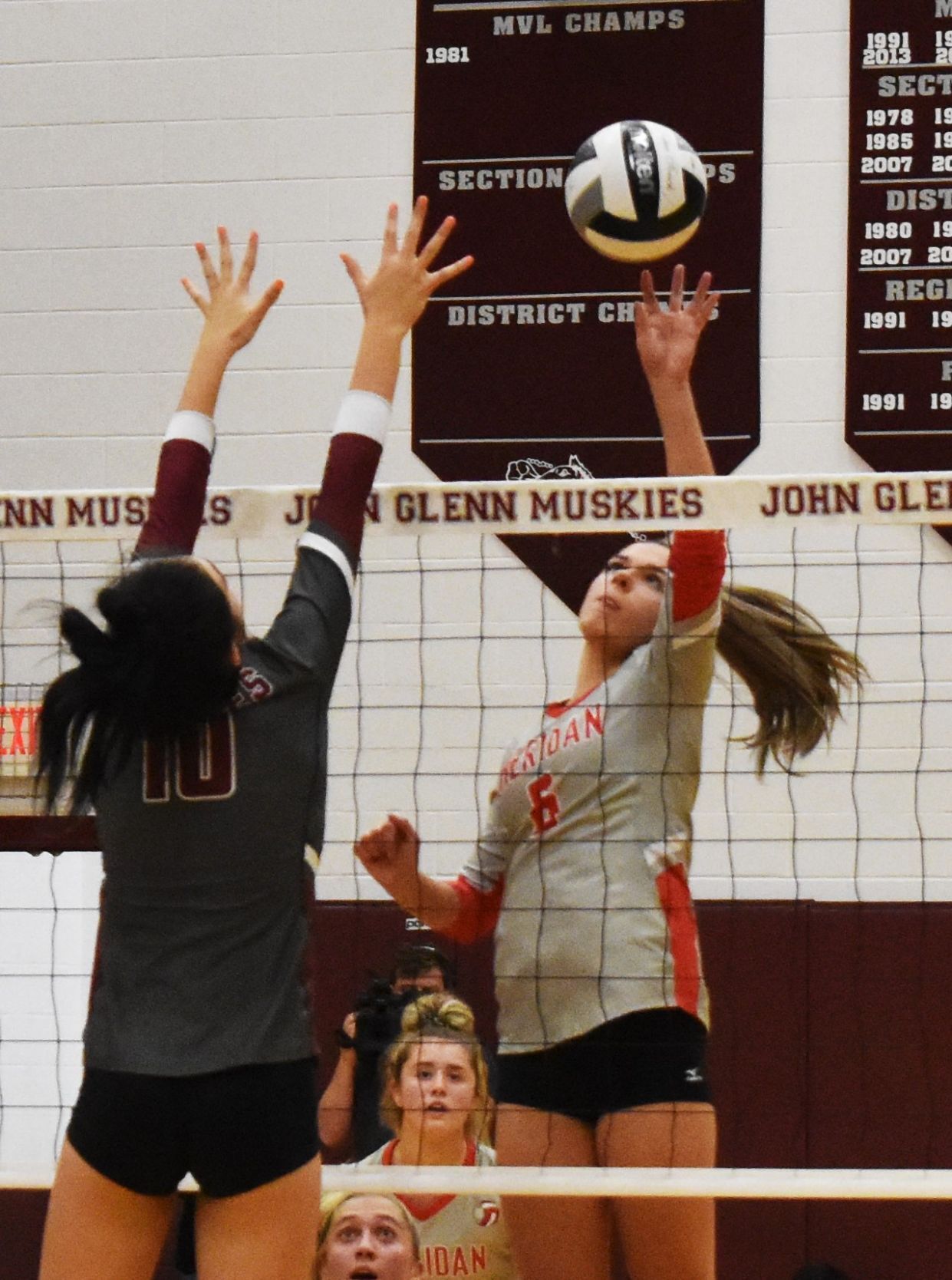 Abby Dupler adds a tip to get a point over the Lady Muskies.

After a final point, the Lady Generals come to the center of the court to celebrate after defeating John Glenn in three sets.

Abby Dupler adds a tip to get a point over the Lady Muskies.

NEW CONCORD — The Lady Generals kept their league-perfect record with a clean sweep of a rivalry win over the Lady Muskies on Oct. 7.

For the first time in a few years, Sheridan volleyball successfully took the win from John Glenn in three sets.

The first time this season the two faced each other, the ladies went for four sets as John Glenn took the second-set win. Sheridan got 3-1 win for the match in Thornville.

For the match in New Concord, Sheridan had their slow starts each set, but halfway through each one, the Lady Generals ignited their fire for a 25-19 win, a 25-16 win and a 25-19 win.

John Glenn started with the first two points in the first set. Sheridan got their first point on the board with a tip from Grace Conrad.

John Glenn brought out their power in their front row to take a good lead with multiple kills down. Sheridan’s fight back was with Ally Perkins and Cassie Amore in the front for kill points.

As Sheridan found their way through the points to double digits, John Glenn started their miscommunications and misreadings of hits.

Faith Stinson and Brooklyn Heller added in the defense of blocks when John Glenn did get some shift in momentum on their side, but it didn’t last long as Bailey Beckstedt found her sweet spot with aces.

Amore rounded out and finalized the first set with multiple kills, and anyone in the gym could see that Amore was out for some revenge with the extra bit of power she had on her hits.

Sheridan took the 25th point with a kill from Amore that broke through the wall of John Glenn’s blockers.

The second set was a repeat in the start as John Glenn started with the first point. After a few kills from Heller and Stinson, as well as some tips from Conrad, Sheridan quickly had an 8-5 lead.

Perkins was holding nothing back from the outside and Heller had three aces in a row to cause John Glenn to make some mental mistakes and have a point difference of 10.

Between Stinson and Heller for the outside and middle kills, Sheridan was in the 20s while John Glenn was still barely scratching the surface of 11 points.

Heller and Perkins set up the kills to get Sheridan to 24 points and Amore finalized the set once again with a laser kill in the center for a 25-16 set win.

John Glenn was slightly deflated in the third because Sheridan started with the first point. John Glenn’s front row was trying to find that fighter state of mind with hard kills, but the hits going out of bounds killed the mood quickly.

Sheridan’s defense really showed in the final set. Stinson was getting big blocks, and in the back, Kaley McCandlish was astounding with her quick reactions to digs.

McCandlish, as a libero, got a point for her Lady Generals with a third-hit push. Sheridan had the 15-12 lead.

The third set was Stinson’s with her defensive work at the net, blocking for points 20 and above.

Amore added in one kill and McCandlish added an ace for Sheridan to get to 24.

Sheridan got their winning point with a block from Abby Dupler that dropped down on John Glenn’s side.

Head coach Mandy Fox mentioned that her girls had been in this exact same spot the last four years in a row and all they wanted was to beat them outright, which they accomplished.

“We talked about it being just another game. We knew that if we couldn’t get through a tough team like this in our league, what would that mean for playoffs,” she mentioned.

“There is something between these two teams and there is mutual respect for both programs, but we had the benefit of so many weapons on the front net and that was our biggest factor.”