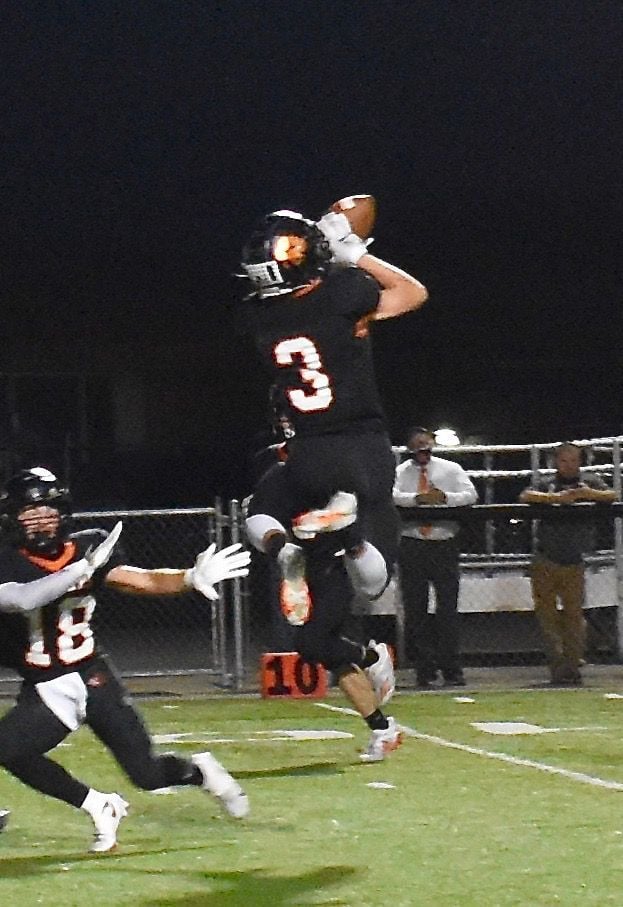 With a giant leap, Brady Hanson catches the throw before dropping down to the end zone. 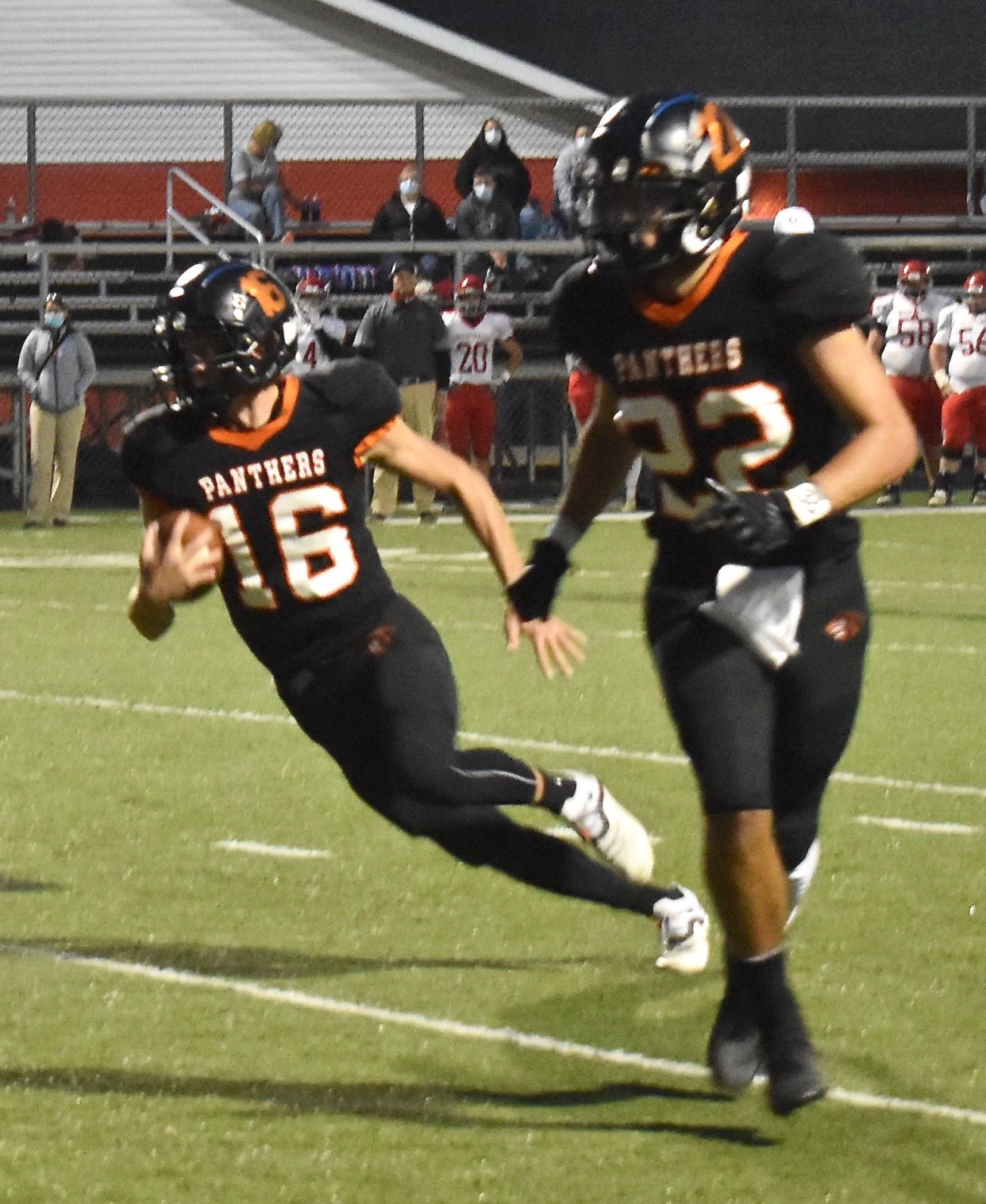 Logyn Ratliff breaks to head for the end zone in the first half.

With a giant leap, Brady Hanson catches the throw before dropping down to the end zone.

Logyn Ratliff breaks to head for the end zone in the first half.

NEW LEXINGTON — The Panthers dominated in their first round of playoffs against Westfall with their weapon in senior quarterback Logyn Ratliff for a 41-6 victory.

New Lexington’s offense had their showing of the season with 437 yards — 76 rushing and 361 passing.

Within the first six minutes of play, New Lexington was already on the board with a rushing touchdown from Ratliff.

The rushing drive came after the first of many interceptions for the Panthers. Shaun Pletcher was the first to gain an interception to lead his Panthers to a scoring drive.

Ratliff found a comfort with Ryan Hobbs and Tatem Toth to work down the field to the single yard before orange turf.

New Lex attempted a 2-point conversion, but with a hard hit from Westfall to Ratliff, the two points were out in the 6-0 lead.

Westfall never had possession for long in the first quarter. After a rollover on downs, New Lexington showed their rare, but effective, flea flicker play.

A panic on it lost them 20 yards in the back, but from second-and-20, Ratliff connected passes to Toth and Zach Eveland to gain a first down at the 41.

Ratliff chose to connect to Brady Hanson from the 41 for a long end zone shot and run. Hunter Kellogg kicked the PAT to get New Lexington up 13-0 in the so-far shutout.

Along with a stellar offense, New Lexington’s defense was ready for play. It showed with senior Braden Agriesti smacking down the passing attempts from Westfall’s QB.

The Mustangs did not gain much in their drive, and on the fourth-down kick, Hanson had the return to get his Panthers to the 43-yard line.

One first down and two other plays later, New Lexington had another trot into the orange turf.

Ratliff got his offense downfield with his handoffs to Hobbs and passes to Eveland. His second pass to Eveland of the drive was a 46-yard shot for the extra six points.

The lead turned into a 20-0 shutout after Kellogg’s PAT with a little over nine minutes left in the first half.

It was quicker than a blink when New Lexington got possession back with their second interception of the night from Hanson.

The Panthers did not make that a scoring drive, but with Westfall’s next possession, Eveland got hit shining moment with New Lexington’s third interception for the night.

That interception started a scoring drive for New Lexington in nine plays. The Panthers moved from the four to the 39, and from the 39 to the end zone.

It was an alternating effort with Ratliff’s connections to Hobbs and Eveland. When New Lexington got to the 39 on first-and-18, Ratliff had the long pass to Toth for the TD.

Kellogg’s PAT was good and New Lex had the 27-0 lead with less than three minutes in the half remaining.

The Panthers had to get one more touchdown on the board before the half, so Eveland’s interception started that.

Kellogg added the boot for the 34-0 lead at the half.

With the second half of the third quarter, New Lexington had their chance, and with that, they scored.

Ratliff’s game plan was not much passing, but handoffs to Pletcher and Hobbs. He did have a pass from the 12 on first-and-10 to Pletcher for another touchdown.

With less than three minutes to go in the quarter, Kellogg’s kick brought New Lexington’s score to 41-0.

Westfall finally found the end zone in the first part of the final quarter. They attempted the 2-point, but New Lexington’s defense held the line.

The Panthers were nearing a 48-6 score, but a holding call on them dismissed Ratliff’s 22-yard shot to Hanson in the end zone.

Ratliff was the stat of the game himself with 361 yards passing, five touchdowns and 17 yards rushing with one touchdown.

New Lexington’s performance bracketed them on the road against no. 1 seed Ironton this Saturday.